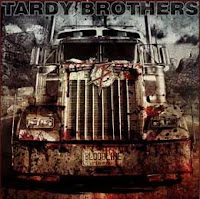 Have you ever wanted Obituary to shift into a hard rocking direction, with more traditional metal focus in the music? Well, Bloodline may just be what you were looking for. Featuring John and Donald Tardy of on the vocals and drums, and Obituary guitarist Ralph Santolla, the band pummels through nine tracks of hard rocking death metal hybrid with the John Tardy vocals sounding exactly as they do in their mainstay.

I have mixed feelings about this, on the one hand I would have loved the band to use these vocals over something that moved even FURTHER into a rock/blues direction. Imagine some raw early 20th century blues with John Tardy doing his trademark growls? That would be pretty amazing. Instead this just comes off as Obituary lite, and even when it works best (on the title track and the very Obituary "Fates Call"), it doesn't distinguish itself quite enough. The album isn't all that bad, I mentioned two of the more exciting tracks and the melodic metal leads and brief flamenco flourish of "Screan Descendent" is also pretty intense.

Where the album does shine is the Morristown mix and mastering. It sounds clear, the guitars have a great chunky sound to them, and the occasional acoustics simmer in the mix. The John Tardy vocals sound their vomited best. You get a few decent tracks here, and I'd liken this project to what Corpsegrinder tried with his stint in Paths of Posession, but I'm glad this is only a side project and Obituary will continue as planned.