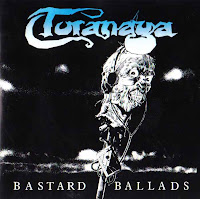 Despite two decent record deals (this album was put out through Peaceville, the second album God's Gift through Chrysalis), England's Toranaga made only a small splash during their career. Though the latter was better received (there was a video for "The Shrine"), I always found the raw energy of this debut superior. The band played with an early Bay Area feel, though heavily rooted in traditional NWOBHM, conveyed through the melodic guitars. Vocalist Mark Duffy has a raspy vocal style which reminds me of early German speed metal, perhaps a dash of Exodus.

There are only six tracks on the debut, so it's a little short. "Sentenced" opens with a melodic thrash riff which reminds me of older Overkill. It's a pretty long track for thrash/speed metal, almost 7 minutes, and has its peaks and valleys. "Dealers in Death" is more of a heavy metal song with a heavier edge to it. "Bastard Ballads" begins with melodic speed metal and has some mellow parts with some cool leads. "Soldiers Be Brave" uses some flowing triplet picking and is one of the thrashier tracks on the album. "Time to Burn" is balladic at points, but picks up into some So Far, So What, So Good style thrashing during the bridge. The last song "Retribution" is a slower, moodier track and sets up the direction of the second album.

The mix here was decent. The drums have a lot of reverb to them so they often reach a pretty crashy level which thunders behind the even guitars and bass. Duffy's vocals are decent but nothing extraordinary, and the songwriting is good without being great. Aside from one or two catchier songs, though, this is a better album than God's Gift, but it's still not enough that I'd recommend it if you're trying to hunt down a precious thrash gem. The album doesn't hold up well, but it wasn't very good to begin with. It's not exactly derivative, but more of a smorgasbord of sounds from better bands and albums. One of the collectors only.