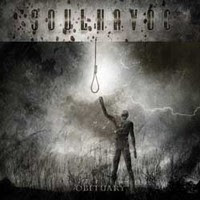 This is the debut from a Finnish melodic death metal band, though they are somewhat slower and less aggressive than many of their peers, instead opting for more of a heavy metal sound to their guitars, but with the raspy vocals common to the genre.

The intro to the album was this incredible martial ambient/industrial piece which truly built up my hopes. As it turns out, the intro was written by another musician Liuos, and after that the album becomes somewhat of a disappointment. The vocals are decent enough, occasionally reminding me of Mikael Stanne from Dark Tranquillity, and the guitars have a nice crunchy tone to them. The band uses some simpler and tasteful leadwork, but the meat of the riffs just didn't have much to offer me. There are still a few moments on the album I enjoyed. The acoustic instrumental with samples "Ending. Prelude to Chaos" is nice, and the track "My Tranquility" is decent enough, but I found the rest of the tracks unmemorable.

The album sounds alright from a mix perspective, though I feel a more exciting track could have been placed after the great intro to really build up momentum. A more mellow approach to the melodeath style isn't necessarily a bad thing, and this is only the debut, so we'll have to see what the band can produce in the future.