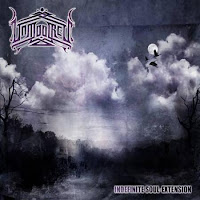 Yet another band to slip through the cracks during the explosion of melodic Swedish death metal in the late 20th/early 21st centuries is Unmoored. Despite a level of ability rivaling the 'big 3' of In Flames, Dark Tranquillity, and Soilwork, they have never risen out of the 2nd or perhaps 3rd tier of bands. It really is a shame, especially with their third offering Indefinite Soul-Extension, because this is a band who can mix it up with the best of them.

"Unspeakable Grief" christens the album with blazing guitars ala At the Gates, accented with some synths and clean chorus parts similar to those used by Soilwork's 'Speed' Strid during this period. The song also delivers a few meaty grooving hook breakdowns. "Commit to the Fire" opens with a punctual, slower thrashing riff sure to transform any idly waiting mob into a roiling mosh pit, before unleashing some pure old school Swedish death. "Leave-Taking" arpeggiates into some progressive and twisting death, even busting into some atmospheric black metal segments and clean acoustic chorus. That's the strength of Unmoored: their ability to incorporate a myriad of sub-styles into cohesion. "Phase of Revulsion" features some big, moody melodies over charging drums and a choppy thrash verse not unlike Testament. "Morndraper" is short, fast, and furious death metal. "Cinders Veil" is another track balancing a brutal thrust with a catchy, clean vocal chorus and some slower grooves. "Spit Forth from Failure" is possibly the best song on the album, total death metal assault with huge sound. The album ends with the acoustic power ballad "Final State Part III: Posthumous Writings".

As mentioned, the sound here is just loud and clear...HUGE. The guitar tones crush when required, but the acoustics are graceful and the synths are mixed just right so that they always remain where they belong: in the atmosphere. Christian Ävestam's vocals are just right, I particular favor his death growl but his clean vocals do not insult. The lyrics aren't bad either. Indefinite Soul-Extension is a little less groove-laden than its predecessors Cimmerian or Kingdoms of Greed, but at the same time it's more memorable and has a greater depth. Definitely not an album to overlook. It's been years since we've heard from this band, but they are supposedly still active, maybe we'll get a new album soon.