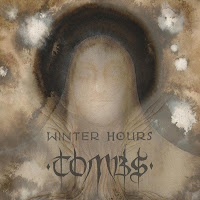 It may only be my first exposure to this New York outfit's elegant brutality, but it will not be my last. I have been converted within the confines of a single album, and this is my favorite yet of the new wave of bands whose name = simple noun + plural 's' (Battles, Reigns, Planks, Tides, Wolves, ad infinitum), a disturbing trend if forgettable in its best cases.

Winter Hours is a beautiful album which combines the angst vocals of the post-hardcore/metal surge with droning, shining walls of guitar chords to create simple but heartfelt and resonant power. "Gossamer" reeled me in immediately just like a fish gorged and content on a fat worm, it's thundering percussion laden heavily in the thick and ringing chords. "Golden Eyes" is like a juicy black metal anthem busting out into a sick old school Neurosis groove. "Beneath the Toxic Jungle" is as if Sonic Youth took up church burning. "The Great Silence" weaves its mystique through alternating sheens of wailing chords and driving black punk moored in distorted bass syrup. "Story of a Room" is a relaxing echo of chords which chimes in just at the right place in the album, giving you a brief respite from the band's heavier palate. "The Divide" resounds again like thunder in its drummer, and "Merrimack" is one of the best songs here with its flowing bass lines and spatial atmosphere. "Filled With Secrets" is again like a post-rock, sludge, black metal fusion, Mike Hill's vocals becoming a black/death snarl. The album ends with the crushing "Seven Stars the Angel of Death" and the tranquil "Old Dominion".

Though the delivery here is excellent, the album wouldn't hit its full stride without the wealth of tone created in its mix. The guitars and bass are simply exposive, you will find yourself immersed in numerous edges and layers. They manage to blend a lot of popular modern mediums of the extreme rock genre (sludge, post rock, etc) and fashion them into something clear in its influence yet flavorful and unique for its future. The album will hit stores soon, so pick one up. It's well worth the ride.