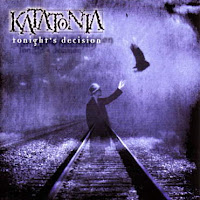 The transformation from Katatonia's death/doom roots into the melodic and somber entity they are today was a gradual one, through the bleak and beautiful Brave Murder Day into the mellow yet driving despair of Discouraged Ones. On this, their fifth full-length, they delivered a monolith of dulcet tones and miserable bliss, having finally realized the metamorphosis into the Katatonia we know today.

Tonights' Decision created a quandary in many of the band's original fanbase due to its accessibility. Long gone are the death vocals and droning repetitions. This is Katatonia lite. Katatonia pop, if you will. But anyone listening deeper, beyond the surface will realize Tonight's Decision is a spray of welcome mist on an overcast afternoon, an embellishment of personal despair with riffs that reflect it. It doesn't hurt that "For My Demons" might just be the catchiest track this Swedish outfit have ever unveiled. Creative clean guitar tone plucking initiates a flowing, grooving breath of sadness below Renkse's sedate lyrical musings. The lyrics to this, and the majority of the album, are essentially blues. If the blues were being played at an upclass gothic nightclub. "I Am Nothing" continues the bleak exploration with its acoustic laden percussion, taking its time to deliver the heavier guitars. "In Death, a Song" provides a melodic syrup of Renske at his catchiest, while the guitars of 'Blakkheim' and Fred Norman shine in all their doomed grace. "Had to (leave)" is a bit heavier and groovier, while "This Punishment" is entirely mellowed blues folk emblazoned with a seering organ sound. "Right Into the Bliss" is all too catchy and warm. The rest of the album is equally passionate, with other standouts including "A Darkness Coming" and "Black Session". The band also offers a reasonable cover of Jeff Buckley's "Nightmares by the Sea".

The mix has a very acoustic feel to it, as if Katatonia arrived in your mid-priced college tenement flat one evening and plugged right in to the amplifiers in your living room. The guitars are silky and gossamer but just powerful enough to pull off its heavier riffs. Jonas Renkse sounds sad. Mission accomplished. Tonight's Decision is my favorite Katatonia record, though Viva Emptiness has grown on me to almost rival it. There is much to offer here for an evening of sadness, to turn your smile upside down.