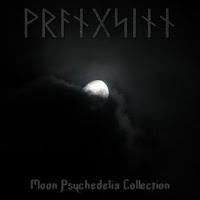 I don't think that my head is nearly fucked up enough to understand what's really going on here, but I have to try. More properly known as the bassist of Carpathian Forest (and numerous other Norwegian metal projects), the Fabulous Holocaust Cowboy himself has decided to unleash misanthropic drug annihilation upon the world with his own project, a pop-tinged ode to psychedelia and madness.

Like* a piss-drunk Norwegian mocking America, Vrangsinn croons and squeals his antisocial way over grooving tunes created in some semblance of stoner rock. The feel is definitely reminiscent of Carpathian Forest's stranger moments, showing off a deranged playfulness that the listener may or may not be welcome to join. This similarity is heightened on some pieces, such as "Death is BEAUTIFUL", which incorporates blackened vehemence, snarls accompanying the poppy vocals for an extra heaping spoonful of discomfort. Other tracks have a harder edge - "Reality is a BASTARD!!!" turns up the heavy with muddy, detuned guitars, while "Visst faen, Det e var" is a punky affair that rocks by with a bit more anger than the rest of the tunes. However, the album certainly has it's elements of fun - "Holy Fucking Christmas Motherfucker" is a pretty hilarious track with rambling lines like 'Jesus was a pedophile I'm happy he's dead IT'S CHRISTMAS AGAAAIN' and the obvious chorus hook that I know I'll be shouting along with on future listens. There's a certain amount of sense to be wrestled from it all, but this definitely stands as a moment of insight into something that's not supposed to understood.

It was vaguely uncomfortable getting into Moon Psychedelia Collection, somewhat akin to having my brain touched in naughty places, but after a couple runs through each song, I suppose I've been perverted enough to enjoy it. The songs vary pretty widely in style and can be repetitive at points, although the rough edges do work in the context of the album as unique imperfections. I can't say that this is for everyone...or for many people at all, but I can say that adventurous listeners could do far worse than checking it out. It's distributed online for free to boot, so there's not much to lose.

http://www.misantrof.net/media/vrangsinn/album.zip
*not just like
Posted by is this your life? at 10:34 AM