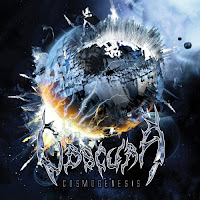 As for the mention of Necrophagist, it's no surprise that guitarist Christian Muenzner and drummer Hannes Grossman were members of that other super tech German entity until the past few years. This blazing sophomore album easily surpasses anything from that other band though, for not only can you appreciate its virtuosity, but they also write some fine riffs of the simpler variety. In fact, the dizzying technicality isn't even the forte of this album, it's the solid offering of memorable riffs. Rounding out the band's lineup are Jeroen Thesseling (once in Pestilence) and Steffen Kummerer on vocals/guitars (from some pretty good bands like Black Horizons and Festering Saliva).

This is a consistent sophomore offering, and better than the debut Retribution from a few years back. Tracks like the opener "Anticosmic Overload" will dazzle fans of progressive death metal with their insanely adventurous bass lines and rhythmic classically inspired picking. As for myself I prefer the tracks with really catchy melodic hooks. "Incarnated" has a pretty intense volley of these, as does the slower "Orbital Elements". If you want to simply get knocked on the floor while your head spins like a top, you will likely appreciate displays of insanity like the title track and the album's excellent closer "Centric Flow".

Cosmogenesis is an impressive statement, whether you subscribe for the band's latent musical proficiency or you just want a pretty kick ass death metal album. It is very possible this will transform them into THE go-to European band of this category, and with just reason. The album sounds superb and the amount of effort into creating such a work is evident. But beyond the obvious skills showcased here, the songs are memorable enough to warrant a recommendation.