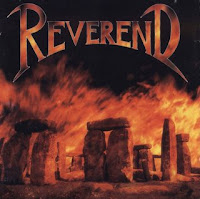 In a very interesting twist of fate, ex-Metal Church frontman David Wayne would go on to form this band with former members of the great Heretic, whose vocalist Mike Howe would replace David Wayne in Metal Church...

So, this is the debut EP featuring four tracks, and it was simply not to be surpassed by anything the band would do on their subsequent full-lengths or the Gathering of Demons EP. Each song is a meticulously constructed slower piece of thrash metal with Wayne's charismatic, haunting high-pitched sneer vocals preaching their doctrines of libel and decay. Essentially, had Metal Church gone to a more thrash direction after The Dark, this is what you might have ended up with. The band are no slouches either, after the excellent Heretic album Breaking Point I had high expectations for their riff writing abilities and they do not disappoint at all.

The songs focus on important social issues and absolutely no bullshit. The lyrics tear off quite nicely as Reverend Wayne points his skeletal fingers at you from the pulpit and begins to fill your head with the fury. "Power of Persuasion" proclaims the ills of inner city struggles, the disintegration of civilization through greed and temptation. "Dimensional Confusion" has a grooving bass below a catchy, simple riff, and Wayne just flies over the top. "Wretched Excess" crunches along, I love the sort of psycho gang shout 'murder' along to his chorus. "Ritual" ends the EP, with Wayne hissing along almost like a Gremlin version of Udo. It also has some amazing melodic riffing.

The production is nice and dense, the guitars are simple but chunky, the bass is nice and popping loud, the drums rock and Wayne sounds great as usual. The first full-length The World Won't Miss You wasn't bad by any means, but I was a little let down after the quality of songs on this EP. At his best, as on this EP, Wayne was a true metal god, and listening to this again, he is certainly missed. It's also a travesty that the band's tribute MySpace page doesn't feature any of these tracks...