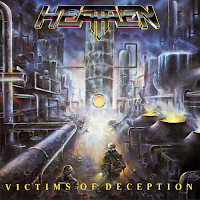 Ah Heathen, another Bay Area thrash band who was a victim of the 'Great '90s Metal Purge'. These guys were good, especially Lee Altus who has been the bands main driving force since it's inception. They mixed the vocals of Bruce Dickinson with the musical sound of Metallica, with a few killer solos and a lot of technical playing thrown into the mix for good measure. Sadly Victims of Deception was Heathen's second, and last, album, and an album that probably only thrash aficionados would know about today.

The album starts off with the infamous Jonestown cult leader Jim Jones ranting and raving about organized religion and all it's evils until "Hypnotized" starts with a cool little intro and then slams into a great thrash song and easily the best on the album. I really love the lyrics in this song, which deal with people who are 'victims to the deception' of the churches, the main theme of the album:

"Opiate of the Masses" is similar to "Hypnotized" is sound and lyrics, but the last third of the song is one long solo section that is really well done. "Heathen's Song" is thankfully not an autobiographical song about either the band or metal music in general, but instead it's a 9:26 long epic about being yourself and not being a sheep (to the church). "Kill the King" is a fast little thrasher which sounded like it could have been an Iron Maiden song. "Fear of the Unknown" is another long song that is similar to the first two, long slow intro, fast middle section, and then a killer (and I mean killer) solo and ending. "Prisoners of Fate" is reminiscent of "Fade to Black", a nice ballad until the midpoint where it unleashes with aggression and solos. The last third of the album consists of "Morbid Curiosity", a great fast song, "Guitarmony" an instrumental like something from a Paul Gilbert or Steve Vai album, and "Mercy Is No Virtue" which is another fast song with another great solo to finish it off, and probably my second favourite song off the album.

As I said before, this is pretty much Bruce Dickinson singing with Metallica, and while I might have been having flashbacks to other songs throughout listening to the album, I really like it. There's just something about it, maybe it's the artwork, or maybe it's the nostalgia of hearing a song that reminds me of old Metallica and Iron Maiden at once. Basically what I'm trying to say is that while Heathen may not have been the most original or groundbreaking thrash act of all time, or even of their time, it's still a solid record that you should definitely check out if only for the fact that the whole album can be streamed or downloaded straight from Heathen's site for free.

http://www.heathenmetal.com/
Posted by Narian at 1:05 PM

It's a pretty good album, and I've always enjoyed it more than Breaking the Silence.

A few years ago they dropped some new tracks on their site and they were also quite good.