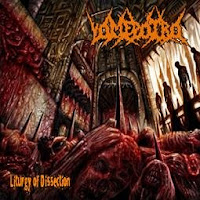 I can't stress enough just effective the band's tone is on this album. The guitars sound hostile and vorpal sharp, seriously the band is just a tightly-strung guillotine with a mind of it's own. The compositions are brutastic, the band really knows how to balance it's chugging mayhem with some truly menacing note selections. For myself, this is that intangible factor which determines the quality of real death metal, and Vomepotro has it with this album. Cristiano Martinez' guttural slam vocals fit in so well with the slicing battery surrounding them that it's difficult not to walk away from this record without a broken neck.

You can pick any of the original tracks here and be impressed, provided you like quality brutal death metal in the vein of Cannibal Corpse, earlier Morbid Angel, etc. "Incorruption" is an excellent onslaught to open the album. "Defaced by Pestilence" knocked me the fuck back with its intense Corpse-like grooves. "Assassin Psychopath" will grind your bones into brittle. "Horror Humanufactor" opens with a perfectly creepy arpeggio. "Postmortiis Rectaliation" delivers a Carcass vibe to it, straight from the surgery ward. There are no losers on this album, even the covers are performed well, though by the time I got to them I couldn't care less as I had been gutted and beheaded by the band's originals.

Liturgy of Dissection is one of the best brutal Brazilian death metal efforts I've ever heard. It may lack a little in the originality department, but most bands of this style do. That doesn't stop it from completely kicking ass. Vomepotro captures their material with the perfect euphoria of a killer stalking its prey. Hostile and violent but retaining the truly sinister vibe evident in all the band's influences. Absolutely check this out if you like extreme death metal.