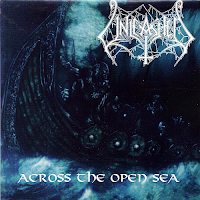 With all the (justified) tumult over Amon Amarth, it's easy forget about the earlier Swedish Viking death metal act Unleashed. Before the mediocre Victory and the awful Warrior, they had a string of simple and straightforward records worth a damn. Across the Open Sea is the third of these, and in my opinion one of best albums of their career (until the excellent Sworn Allegiance in 2004).

Unleashed were a little simpler and more groove-laden than many other death metal acts during this period. The focus was not on sheer brutality but on making the best use of that classic guitar tone in tunes that rocked. I wouldn't call the band death'n'roll per se, they didn't take this to the extreme of Entombed or Desultory, but there is a little of that vibe present on this album.

"To Asgaard We Fly" opens the record at an eight-legged trot, with some breakdowns. "Open Wide" is slower and groovier, based around a simple chord progression but making good use of the guitar tone. "I Am God" uses a more traditional death metal riff, and "The One Insane" rocks out at a middle pace with some of those Entombed-like chords which hit you like a brick. Other nice touches on the album are the instrumental "Across the Open Sea", the blazing "Forever Goodbye [2045]", and the groovy "Execute Them All". The cover of "Breaking the Law" is mediocre.

Across the Open Sea is dominated by its excellent guitar tone and solid drum battery. The bass is present but never quite enough to matter. Johnny Hedlund's are usually at their gruff best, but at a few points they seem less inspired. I wouldn't call the lyrics good: I am the psychopath/I live in my own world/I'll be the one you fear/...the one insane could hardly be considered poetic, but at least it fits the song. The band wasn't re-inventing the wheel at this point but their simple delivery and occasionally Viking folk-inspired lyrics did set them apart from some of the other Swedish death metal bands emerging at the time. This was their best effort prior to the millennium.