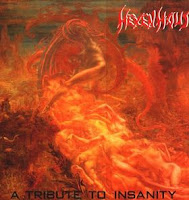 Let me get the obvious out of the way here. Yes, the Hexenhaus debut album has the same cover painting as Morbid Angel's Blessed of the Sick. Yes, Hexenhaus used it first.

A Tribute to Insanity is one of the first good Swedish thrash albums, before even Presage to Disaster by Midas Touch. The album has a dark and brutal edge to it which is far more punishing than a lot of other thrash metal, yet there is nothing really complex about what they do here. No tricks and no surprises, it's simply the audio equivalent to a good hard knuckle duster. Of note is Mike Wead's involvement with the band, you can definitely hear a Mercyful Fate likeness to some of the riffing, although the vocals are nowhere close, original singer Nick Johansson has a very cruel sounding style which really elevates the music.

"Eaten Alive" is a sick fucking track, a total Swedish thrashing classic, beautifully evil and down right mean sounding. If you were out in the street and a bunch of guys started coming at you in ripped up jeans and leather and they were mouthing the words to this song, you would run really fast in the other direction. Amazing, but it's not the only song here to kick some ass. "Delirious" is a dark song with some sinister leads. "Incubus" is speed metal with a heavy Mercyful Fate to the riffing. "Death Walks Among Us" starts with a ripping lead and features a delightfully dark verse with numerous riffs. "Requiem" will have every non poseur banging their goddamn heads until they bleed from the fore.

The mix here is really repressed sounding, clunky and grim, yet the leads slice on through the fog with all their glory. A lot of people might not be into the tone, but I personally love it, as it forms a nice bridge between the dirty thrash and the more classy NWOBHM sound that likely influenced the band members. A Tribute to Insanity is still my favorite album from Hexenhaus, though the second album The Edge of Eternity is also pretty good. A monument of pure thrash terror, and still sounds cruel to this day.