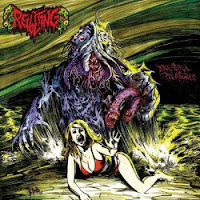 Another colorfully retro death metal album cover and another excellent taste of Razorback Records' ear for quality new artists paying their respects to the classic death and gore metal of yore. Revolting performs a Swedish old school style akin to countrymen Paganizer, Ribspreader, and Repugnant, and it's really no surprise: this is yet another band to feature the vocals of old school Swede guru Revolting Rogga Johansson, who is a member of two of the aforementioned bands (as well as Demiurg, Carve, Putrevore and a host of others). Once again, he's done well for himself. This is quite good; there isn't a moment on Dreadful Pleasures during which I wasn't entertained. The songs are crafted simply and effectively in the vein of old At the Gates/Grotesque, Entombed and Dismember.

"Tenayfly Viper" opens with its grinding and bouncing guitars beneath a noodly and messy lead, but like all great Swedish death it has one of those trademark melodies. "Terror Has No Shape" busts out like total Left Hand Path/Clandestine bliss, and again with the melody. Many of the other tracks follow suite. "Overtaken by the Crawling" has some creepy breakdowns and very evil sounding riffs. "Moonshine Mutation" is one of my favorites on the album, with a classy melodic riff, and "Brainwaves of Death" is also really cool.

Lyrically the band focuses on cult horror and sci fi camp, tracks about freaky monsters and mad scientists. This falls in line with a lot of Razorback's thematic acts like Ghoul and Crypticus, and will certainly please connoisseurs. It's also an easy recommendation if you like just about any of Rogga's other current or past bands. The guy is prolific, I have to admit. Granted, the differences are very subtle between this and some of his other retro styled bands, but it's enough.