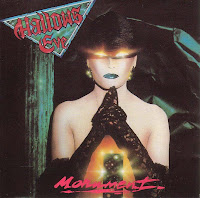 While it may have lacked the dark and raw appeal of previous albums Tales of Terror and Death and Insanity, Monument made up for it with more consistent songwriting. There is a simplistic and plodding feel to this album, not unlike ...And Justice for All or many of Sacred Reich's earlier records or D.R.I.s pure thrash phase. It doesn't always hold up to time, but there are some songs here which are still pretty catchy.

"Speed Freak" is one of those songs you hear and think even by 1988, how could someone not have already come up with it? The chords used are very basic but perfect for a very bludgeoning and memorable track about a high speed lifestyle. Is it about drugs? Is it about driving? All I can tell you is I like the self-reference to 'lethal tendency' (one of their best old songs). The cover of Queen's "Sheer Heart Attack" was passable but Stacy Anderson's vocals are a little goofy. "Rot Gut" is a nice redneck thrash anthem. "Monument" is a pretty powerful title track, and again it has some very simple but catchy thrash guitars. "Painkiller" and "The Righteous Ones" both rock, and "The Mighty Decibel", though silly, is also memorable.

Guitars are crisp and Anderson's vocals sound pretty good here for the most part. It does lack the heavier, crushing tone of its predecessors and I'm not sure the cleaner mix works in its favor, but it's not bad. This is the type of album that was never quite 'excellent', but it was good back when and it's just about as good now if you don't mind a simpler style of thrash. Just don't expect anything mindblowing and you may find that you like it. Certainly better than any of their disappointing reunion albums of the past few years.