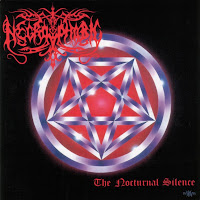 There are classic albums and there are cult albums. The Nocturnal Silence is both, one of the best early statements of the Swedish death metal uprising of the early to mid 90s. Unlike a Left Hand Path though, this one wasn't an instant personal attraction. It took several years to develop on me, but one drunken evening I was listening to it with a friend at university and it suddenly dawned on me...this is awesome.

Necrophobic tend towards the occult side of the death metal spectra, with grim lyrics about hell and vile philosophies. They have a similar guitar tone to their contemporaries, but otherwise do not sound quite the same as far as how they present their riffs. I once thought this album was a rambling mess, but it is in fact pinpoint in its delivery of grinding guitars and the barking of ex-vocalist Anders Strokirk. The album is produced by the infamous Tomas Skogsberg so you know what to expect.

As a complete work The Nocturnal Silence is extremely consistent, each of the nine tracks destroys. "Awakening" begins with some spooky keyboards, soon joined by some slower leads before the churning guitars herald the apocalypse. Simple old school death rhythms commence a dark mood on the diabolic "Before the Dawn". "Unholy Prophecies" has a few rhythms which recall Slayer when they were good. The title track begins with haunted acoustics, again building into a grim lead melody. "Inborn Evil" has a slower groove to it, while "The Ancient's Gate" starts with the sickest groove on the album. Also of note are the barbaric and fast-paced "Sacrificial Rites" and the creepy "Where Sinners Burn".

Though the album has been remastered, it still sounds great in its original form. There is nothing overly polished about it, it simply manages to retain a dark intonation that many death metal albums only wish they could have. So often we forget what the pure evil of this genre used to sound like, jaded from endless overdubbed albums with focus on technical precision to the detriment of atmosphere. The Nocturnal Silence remains my favorite of Necrophobic's albums, and a true relic of extreme Swedish metal.