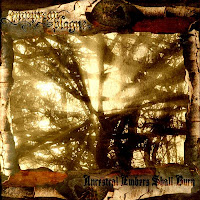 Ancestral Embers Shall Burn is the second full-length from this Canadian Viking longship, and the fire definitely burns within them as they play a very direct style. Acoustics introduce glorious chords, black metal barks and choral vocal chant. The album has just the right amount of atmosphere, the instruments are all clear and shining, and occasionally I was convinced by a pretty good riff.

The band I relate this style to most is Borknagar during The Olden Domain/Archaic Course period (with an obvious dash of Bathory's Viking albums), though Empyrean Plague has a slightly more accessible, less complex spin on it. A lot of the riffs are the pretty typical melodic black metal variety, workable strings of notes but just not so memorable. The opening track "Sheathed in Hate" was an exception because I actually really like the way the chords flow, even if they basically repeat a lot, the playful bass lines and the charging buildup in the middle of the track won me over. The second track "Our Horizon Calls" is a little faster until the verses. It's not a bad tune but you hear everything you need in the first riff. "Cursed by an Endless Winter" and the title track went right through me, there was little I remembered. "United (We Stand)" and "To Bestowe the Power" are slightly better, though there is a sloppy transition after the 1:30 mark of the latter. Album closer "We Are the North" is good and heavy, and along with the opening track it's some of the best material here.

For an underground band the mix isn't so bad; I like the bass playing on the album and the interaction between the snarling vocals and the glistening guitar melodies. Most of the riffs just didn't do it for me, they work within the context of the band's folk metal theme but they don't stand out in a world where we have bands like Enslaved and Moonsorrow taking this style to such well realized extremes. Still, there isn't anything else negative to say for this album (aside from the blinding cover art). The songs do display effort; the band seems pretty sincere about this style (there is nothing too cheesy or over the top here). I didn't much out of it, but there is enough potential that I'd like to hear what they can write next.