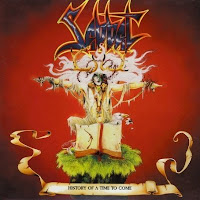 After a pair of demos and the "Blood for the Blood God" flexi-disc in White Dwarf magazine, it was only a matter of time before Sabbat birthed their first full-length masterpiece. That the amazing Noise Records signed the band comes as no surprise, they had possibly the best taste of any independent label in the 80s when it came to filling out their roster.

Thus, Sabbat released their debut, and one of the most impressive occult speed/thrash metal albums of its day. Martin Walkyier's vile vocal style is the perfect vehicle to steer the endless cavalry of well-constructed, intense riffing. I realize he got a little more diverse with Skyclad, but none of the goofy puns and limericks of that later project could touch his excellent lyrics and savage delivery in this band. His use of multiple styles really works in a conversational tone, from his snarls to his deeper, 'Chaos' voice.

A resounding intro piece leads into "A Cautionary Tale", an amazing Faustian track. Who could forget Walkyier's infernal sneering of: Bell, book and candle, candle, book, bell, forwards and backwards to damn me to Hell. "Hosanna in Excelsis" is an inspiration, charging piece about the revenge of the fallen angels upon Earth and Heaven, and it even reflects this in the lyrics, which are again unsurpassed in their delivery: Hark! The fallen Angels sing: Glory to Satan our King! The Holy Church we thus defied, the usurper crucified! set to an amazing, thrashing breakdown riff. "Behind the Crooked Cross" leers at you from behind its namesake, a crawling yet powerful track with some pickup speed metal. "Horned is the Hunter" is yet another excellent composition, with resonant acoustic intro which takes you to a sylvan glade before the chords erupt. "I for An Eye" features some cool harmonics over its opening riff, and is yet another track about the deception of the supposed path of divinity, as told to Lucifer as he was cast from Heaven, in total Paradise Lost style dialogue:

Mine is the right to glory and light,
and you shall have heartache and pain,
yours must be Hell -
for in Heaven I'll dwell,
I care not for that earthly domain.

"For Those Who Died" is a tribute to the witches falsely burned at the stake. "A Dead Man's Robe" is an epic speed metal instrumental with a nice refrained, charging riff and subsequent breakdown. "The Church Bizarre" is a loving tribute to 'donations' to the pulpit. Religion and hypocrisy are such central subjects to this band, carrying through onto their 2nd album. But Sabbat handled it so well with Walkyier's mocking, clever lyrical explorations, it made the rest of the thrash/speed metal scene seem almost childlike and foolish by comparison. It's also clear that Martin was heavily inspired by classic English literature, a feat that would only be repeated once Cradle of Filth came along (a band who cites Sabbat as a major influence, it's not difficult to hear or see why, Dani also uses a mixture of snarls and grunts to deliver his classical and poetic lyrics). In fact I feel this record had a largely uncredited impact on the emerging black metal genre as a whole. The band has reunited since Walkyier left Skyclad, to do some reunion tours and festival. Who knows if we'll get a new album.

If there is one reason I can't give this album a perfect score, the mix of the album does not hold up for me particularly well, and I favor the 2nd album Dreamweaver ever so slightly for this reason. It's not bad but the guitars don't carry a lot of resounding power. Regardless, this is one of the best thrash/speed metal albums of the 20th century, cohesive and impressive. It's one of the albums that forever emblazoned my soul with the phrase 'Thrash Until Death'. Absolutely mandatory listening, as well as its successor.