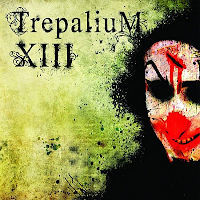 Alright, let's look at that cover art. It's terrible. Absolutely, irredeemably terrible. What kind of a band would choose something like that? Strangely, a goddamn great one. Although it's my first exposure to them, XIII is Trepalium's third album, a killer medley of technical malevolence and a fresh new argument for the richness of France's current metal scene.

Trepalium play a unique take on tech death that contains as much stoner grooviness as it does brutality. Winding riffs playfully, ominously shift their way around odd tempo changes; the guitars peer from angles of uncertain reality, beckoning violently. Thankfully, Trepalium eschew the spastic seizure approach, choosing instead to create well-balanced, flowing songs full of prog, jazz, death metal, metalcore, and grind elements. Gojira is an obvious reference point, although the style isn't that easily compared. "Addicted to Oblivion" looks into an alternate dimension where Clutch became a death metal band - Keke's filtered roaring and the buzzed, off-kilter riffing bring the smell of spacegrass instantly to mind. Melodeath is taken on an inebriated tumble down a flight of stairs with "World Plague", even pausing for a metalcore breakdown that not only isn't terrible, but actually fits naturally into the song. As a one-time occasion, "Glowing Cloud" dampens the tech elements down while it struts out some Morbid Angel brutality, much like a French version of Aeon. Trepalium cover a bewildering span of styles, made all the more sweet by their impressive ability to knit them together seamlessly. The musicianship here is extremely tight and organic feeling - there is never a dull or (unplanned) awkward moment on XIII.

A shining gem for any tech death stalwarts, XIII should prove equally entertaining for fans of more progressive metalcore acts like Between the Buried and Me. Hopefully this album garners Trepalium the attention that they deserve, because it's too damn good to be passed up.

http://www.myspace.com/trepal
Posted by is this your life? at 1:05 AM

Really? Wow, I didn't enjoy this album at all. Was a fan of Through the Absurd too.

I can't bring myself to give this a listen. The cover art! Aaah!

Yeah, the album art is totally gross. The music didn't grab me either the first time, but I plan on giving it more listens.

Huh, yeah, I really like it. You were probably scarred by the cover art :P