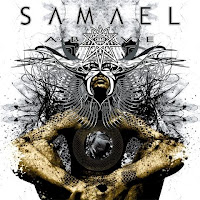 Samael have been on a tear in the past few years, but to be honest they've been producing the type of albums that only the dedicated fanbase would be able to appreciate. Fused with elements of pop, electro and even a kind of rappy vibe, Vorph's vocals were just growing stranger and stranger. Their last album Solar Soul was quite good, but not at the level of the romantic Eternal or the monumental Passage (which remains one of my favorite metal releases of all time).

It is with some surprise that Samael have dialed back the years on their latest album, for a heavier approach reminiscent of both their black metal roots and their first few forays into synthesized gothic mayhem. It's an interesting maneuver that may put them back on the radar of dispossessed fans who abandoned the band in the early 90s, but should still appeal to those into the Romantic modernisms of the band's cosmic unity consciousness.

Above opens with the shattering "Under One Flag", a brutal number with some traces of glorious melody hinted at its fringes. "Virtual War" continues this style of Passage on Prozac. Vorph's vocals are truly back to the roots, loud in the mix, black as night but lacking a lot of the goofy but endearing phrasing they've had on the past 3-4 full lengths. "Polygames" begins even heavier than the first two tracks, but it does give itself some room to breathe with its epic, sweeping chords and synths. "Earth Country" and "Illumination" are likewise very heavy tracks for this band, but they possess a little more of the melody and anthem qualities of the previous album. The album seems to save its catchiest surprises for its latter half. "In There" is a majestic track with some galloping rhythms and desperate guitar charging. "God's Snake" is a total Passage style song, and just about as good. "On the Top of It All" is another of the best tracks on the album, with a trippy intro that soon transforms into a grinding death metal bit, and then again into some bluesier bruising leads.

If Above has a weakness, it's that the band seems to have gotten too heavy all at once. The album does not lack for consistent energetic brutality, but it's simply not as catchy as what we are accustomed to. Granted, this might be a good thing to a great many people...obviously the band wanted to deliver their fastest and heaviest offering in a good, long time. Samael is probably unlike to come up with another Passage, but Above makes a concerted effort: it simply lacks that classic album's penchant for timeless and memorable tracks. However, if you've been avoiding the band because of their poppy side for the past few albums, it may be time to re-subscribe.