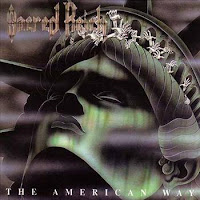 Yet another US thrash act that was on the cusp of something great before the wave finally broke and grunge took over, sending metal into its 90s hibernation (to be fair, it was a pretty active hibernation). Before they tried to ride the wave out with weaker material in the 90s, Sacred Reich managed to deliver two good full-lengths and an EP. The American Way was the second of these full-lengths, and for the most part a pretty good time.

Less caustic than Ignorance, this album was primed for success. Simpler, accessible thrash tunes with groovy riffs, catchy chorus parts and Phil Rind's beefy vocals. "Love...Hate" begins the album with such a song, stripped down thrash with a slower, power chord driven chorus and some cleaner vocals, though somewhat lacking lyrically. The title track was one of the band's more popular tunes, with a flowing but destructive verse riff and catchy chorus rhyme. "The Way It Is" has a rock style chorus after some chug laden verse riffs. "Crimes Against Humanity" is a thrash dirge with a slow buildup but a very catchy payoff, though the lyrics are total 80s metal hippy trash. "State of Emergency" and "I Don't Know" are both good tracks to round off the album. "Who's to Blame" is your typical anti-PMRC/censorship track.

That leaves "31 Flavors"...a funk song. Now, I realize they meant well with this, it's a sort of ...politically correct...errr...Metallically correct funk song? The band lists off styles of music and particular artists that it's 'cool' to listen to. It's actually pretty fucking retarded, and embarassing to listen to today (I wonder how they feel about it?) A funk song thrown in without an awful subject like this might have been funny, but when the lyrics are:

Vanilla is smooth chocolate is kickin' strawberry is sweet all deserve a
hearty lickin' have em all three scoops piled high variety is the spice of
life
Well you can have soft serve and hard sugar cones root beer floats or my
banana split do you like nuts or some sticky whip creme come lick it off
and be my dairy queen
I love the Chilis freaky, uplift, mother's milk Faith No More Mike
Patton's voice is smooth as silk Metallica's music makes me want to rage
Sting's lyrics have something to say Jimi Hendrix plays guitar like a no
one else Black Sabbath Ozzy's voice is sick as hell Prince, Fishbone,
NWA these are the things that I like to play
Mr. Bungle is so very cool so don't be an ignorant fool there's so much
music for you to choose so don't just be a metal dude it's cool fool

It's cool fool! Don't just be a metal dude! FUCKING GAG ME SACRED REICH. GAG ME. You can even hear one of the guys in the band state "Dude...that is NOT metal" as if in some lame attempt to 'rationalize' the choice to include this travesty.

The album has been remastered, but even the original sounds decent by today's standards. This album is a lot less heavy than Ignorance, a fact that drove some fans away from the band. Some of the songs here are pretty fun, it's just a shame they had to go and ruin it. If you can stomach some simpler and mainstream thrash metal, and can accept the very 'end of the 80s' vibe here, then this isn't quite so bad.

31 Flavors sounds like the worst song ever, I'll pass on this.

Guys, guys, I heard there's other genres of music besides metal but I'm not sure if that's true because some hobo on the side of the street told me. Confirm/Deny?

Sacred Reich has awakened us, and now we shall awaken you! There ARE in fact other genres of music than metal...