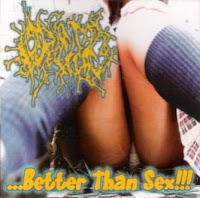 I was going to go into detail about how this album made me want to beat my meat while thinking of Japanese school girls sitting in my lap, but always the realist, I realized this would only make me look like a very sad man who pursues his escapist fantasies by writing sick sexual gore grind to shock and thrill others until they share in the joke with me, obscuring the fact that I am one very sick perverted fuck.

So instead of that, I'm going to share with you some Sylvia Plath.

Empty, I echo to the least footfall,

Museum without statues, grand with pillars, porticoes, rotundas.
In my courtyard a fountain leaps and sinks back into itself,
Nun-hearted and blind to the world. Marble lilies
Exhale their pallor like scent.

I imagine myself with a great public,
Mother of a white Nike and several bald-eyed Apollos.
Insread, the dead injure me attentions, and nothing can happen.
Blank-faced and mum as a nurse.

It turned out Better Than Sex! wasn't actually better than sex, but it brought on numerous giggles and rainbow smiles for all to share.

You can't claim to be "Better than Sex!" (with an exclamation point) unless you mean it.