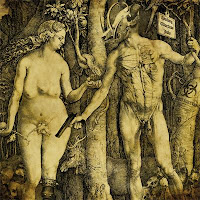 With an energy that easily matches their previous album The Devil's Music, Denmark's Horned Almighty impress yet again. With a sound rooted in the traditional grooving black/thrash of Hellhammer and Celtic Frost, they offer a grinding edge to these tracks which really stands out among their peers. The focus is primarily on slower to mid-paced, powerful riffs and Smerte's compound black/death vocals (Smerte = Simon from Denmark's death stars Exmortem). Contaminating the Divine is a potent concoction. It rocks, and it's a lot of fun.

"The Works of Witchcraft" begins with some feedback and a tinny rehearsal drum track before breaking out the mammoth hide thick guitars. Like most of the songs on the album, it relies on very flowing and simple chord progressions to deliver a genuine old school experience, yet the production standards on the album are amazing. The title track follows with an even more amazing series of riffs, the verse feels very much like slower grind or brutal old school NYHC but it works very well within the black/punk context. "Death of the Soul" pummels with its bass thick intro and has some nice breakdown riffs. "A Satanic Salvation" feels like loading up the pickup truck with shotguns and pitchforks, then heading down to town to sacrifice some fine unsuspecting country folk. The rest of the tracks are equally exciting, in particular the moshworthy "The Doctrine Supreme" and the gut wrenching "Day of Purification".

As mentioned, the sound quality here is perfect. The guitars clobber you right over the head with the driving chords, and the points where they begin to chug are equally powerful. The bass is perfectly layered and distorted, the drums carry the weight of the axes and Smerte is spewing his ghoulish Satanic slang all over the rhythms like infernal maple syrup. If there is any flaw to be found here, one might argue that the album is a 'one trick pony', using the same basic grooves in many of the tracks. But when things are this good, who cares? One sick pony, I say. Contaminating the Divine is a welcome addition to this band's great discography, and should please fans of The Devil's Music or anyone else who wants a grim ass kicking. Go and order it.