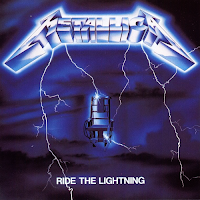 In 1984 Metallica released one of my favourite albums of all time, Ride the Lightning. While it was a departure from their pure thrash debut Kill 'Em All, it was heavier, darker, more progressive, and overall better in every way than it's predecessor.

And it all starts with a nice little acoustic guitar intro...

Then around the 0:41 mark something happens. Something... magical. One second the guitars are exploding into "Fight Fire with Fire" and then 48 minutes later you're laying on the ground with a sore neck and hands which are permanently stuck making the devil horns.

When you come to you might remember hearing the biting production quality present on the album, something that you don't hear in any other album Metallica has ever made - past or future. But what is production quality without good songs?

The raging opener "Fight Fire with Fire" melts your face off with it's radioactive message and twin guitar solo. The title track is a cool midpace song with a great old-school Hetfield scream in the middle. "For Whom the Bell Tolls" has it's bell and it's catchy - and depressing - lyrics. The criminally underrated duo of "Trapped Under Ice" and "Escape" have some good moments, but they have one problem: they are on the same album as "Fade to Black", "Creeping Death" and "The Call of Ktulu".

These three songs are the heart and soul of the album and make everything else on the album pale in comparison (and that's no easy feat). First, "Fade to Black". This song is so delicate, yet so immensely powerful with it's the solo finish. "Creeping Death" is a great thrasher with a chorus that will never leave your head (and take your first born while it's at it). And finally the closer "The Call of Ktulu" which is hands down the best instrumental Metallica has ever written.

This is what metal is all about. Nuclear warfare. Corporal punishment. War. Suicide. Biblical plagues. Cthulu. Great solos. Great lyrics. So strap in, raise your hands, and Ride the Lightning.

http://www.metallica.com
Posted by Narian at 9:08 PM