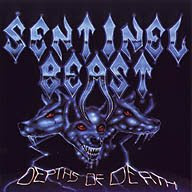 Sentinel Beast was another of the 80s US thrash bands to feature a female vocalist who did not suck. Debbie Gunn had a harsh voice well suited for the genre, it had a similar edge to it as Nichole Lee from Znowhite or Dawn Crosby from Detente/Fear of God. Gunn even fronted Znowhite for a short time.

Depths of Death is the Californian outfit's only album, and at its heart it is a decent, simple, burning style of thrash and speed with a grinding edge to the guitars. In places it reminds me a lot of Slayer's early material like Show No Mercy or Haunting the Chapel EP, except the guitar solos are a little more classically influenced and the band wasn't quite as deep into the faux Satanic imagery.

Most of the songs are decent and fast, like much you'd hear on the Metal Blade label back then, but there are a few that stand head and shoulders above the others. "Dogs of War" is a great song with a nice stop/start, slower intro riff and then a faster verse akin to "Chemical Warfare", with Gunn's vocals laying forth the vitriol. "Corpse" begins with some nice solos over a flowing metal bass line, it also has some nice riffs. Other decent tunes include "The Keeper" and the burning metal larva of "Evil is the Night", I love the energy in the breakout riff of the verse.

Despite it's age, the mix is nice and raw and all the instruments and vocals are actually right on the level. This is a nice departure considering so many albums of its time had the vocals far too ahead of the rest, but here it's a very savage balance. I didn't enjoy this nearly as Detente's Recognize No Authority or Znowhite's brilliant Act of God, but it's another fond reminder that there were some pretty damn metal 80s female vocalists, vastly superior to the watered down fairy opera drama student bullshit we are subjected today in many female-fronted power and gothic metal bands.

Like many others, Sentintel Beast has recently re-united and has some new songs available at their MySpace.