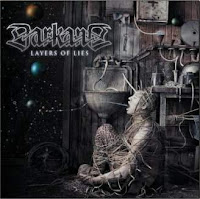 It took a few albums for Darkane to trump their excellent debut Rusted Angel, but trump it they did. Both Insanity and Expanded Senses maintained the band's use of technical precision, high velocity Swedish death/thrash, but they lacked a little of that debut's depth and biting, charismatic edge. Layers of Lies recaptures that quality and complexity, and in fact surpasses it. I was initially thrilled by the album, but it wasn't until recently that I started spinning it again and became even further enamored of its charms.

Layers of Lies, as the title might imply, is a bewildering and challenging arrangement of piston fueled Swedish thrashing the likes of which only Darkane can conjure. The composition skills of Klas Ideberg and his bandmates are stunning, and I haven't been able to appreciate thrash at this level since the late 80s; bands like Artillery or Deathrow jump to mind (in terms of their riffing skills, they sound nothing like Darkane). This isn't a wanking type of technicality though, it's a skill at creating innovative note selections and an almost constant business to the guitars. I admit, not all of the tracks here stand out right away. It's the type of album that will grow upon a listener as the boundaries of its gray matter expand to the devastation. Add to this the best vocal performance (and sad swan song) of Andreas Sydow to date and you've got a total crusher. The lyrics to the tracks are excellent explorations of violence and the social construct; the human organism and its true purpose and limitations within the confines of nature and civilization.

It begins much like Rusted Angel, with an orchestral intro. This one is known as the "Amnesia of the Wildoerian Apocalypse", named for the band's amazing drummer/composer. The end of the intro begins a slow thrashing haul, and then "Secondary Effects" explodes onto your ears with more passion than most other bands can summon throughout their entire careers. The verse riffs are absolutely fucking intense, and Sydow BEATS the lyrics into you harder than Tomas Lindberg or Anders Fridén could even dream of doing (no offense to that pair of vocalists). The bridge riff is unbelievable, and the chorus epic, as Sydow coughs up:

Orgasmic smell of blood, a new born beast
I have become, I have arrived to join this feast
Born a beast

Once this fantastic track ends, there is no rest for the wicked. "Organic Canvas" bewitches you with its winding chops, barbaric drumming and catchy barking. "Fading Dimensions" begins with a few doomy tones but it isn't long until you are once again pummeled with Darkane's brand of depth charge thrash metal broken up by catchy vocal hooks. The title track is immaculate; beautiful acoustic and lead tapestries part into a bludgeoning and intense mid-paced thrash hook which is so industrial in its feel that you can close your eyes and instantly summon a vision of a long forgotten, rusted but still operative factory churning out waste. The chorus here is also particularly fetching. "Godforsaken Universe" picks right back up into the faster pace, and "Vision of Degradation" works its slower voodoo upon you, picking up for some intense grooves that will probably make you at least ball up your fists, even if there is noone standing nearby to hit with them. "Contaminated" is just par for the course, but begins with a sort of bluesy entry into its sheer awesome. "Maelstrom Crisis" is a glorious instrumental piece which evokes some classical/acoustic sounds amidst its inventive thrash. "Decadent Messiah" starts with bass and then injects a little mathematical groove before it really picks up. Another killer chorus shouts:

Kneel down
Bow before his feet
The master of deceit
Bloodstained, raging liar
Rule with death and fire
Decadent Messiah

The album offers no relief on the ending track "Creation Insane". You won't want any relief, because this is just that fucking good. Trust me, if you don't pick it up the first listen through, continue to do so. You will worship this. Hell...even if you DO pick it up the first listen through, listen to it again! The mix of the album is crushing, one of the best I've ever heard from a Swedish metal album. Every subtle note and bold crushing rhythm is balanced to perfect effect. Sydow's vocals truly stand out and it's a goddamned shame he left after this album. The following album Demonic Art is simply not this good, nor is Jens Broman (a decent vocalist in his own right). Even the cover art here is pristine.

As a musician myself, this is the type of album that turns me vomit green with envy, because I know I will likely never in my life create something of this depth and complexity. It's a flawless album and the fact it's been overlooked by many aside from the usual crowd of Darkane fans or those deep into the Swedish death/thrash scene is once again a crime against humanity. What more could I possibly offer that wouldn't simply be stealing away your attention or time in tracking down this album for yourself?