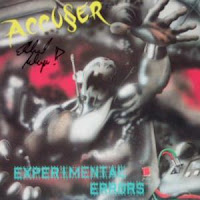 Is that Brainiac on the cover? (Ed: I stand corrected, it is Ultron.)

Accuser was a relatively obscure German thrash band, but they were fairly prolific in the 80s-90s, having released six full-length albums. Experimental Errors was their 2nd official release, a six-track EP nestled between The Conviction debut and their sophomore full-length Who Dominates Who? The style here is not unlike other German bands, perhaps Vendetta or Deathrow but with vocals that sound quite a lot like Kreator's Mille.

The EP opens with an acoustic piece "The Persuasion" before busting out "Black Suicide", a slow to mid-paced though technical thrasher with some decent leads and barking vocals. There are some good parts to this song but unfortunately it's not highly exciting. "Terroristic Violence" picks up the pace a little, and it sounds a LOT like Kreator. "Technical Excess" has a good riff or two and it's by far the most exciting song here. Had the rest only been more like this...but wait, they are! "F.H.W.C." is another strong track with a good punchy sound to it.

I believe this was vinyl-only upon its release, but it was tossed onto the re-issue of The Conviction in the 90s. If you can pick it up in that format, it may be worth it, because their first few full-lengths are better than this material, gems of 2nd rate German thrash. However, it is not worth tracking down on its own. They simply sound here like a pale imitation of better bands that were going on at the time: Kreator, Sodom, Destruction, and so forth.