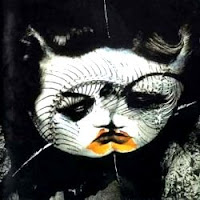 It is a crime that fame and praise have come to Arch Enemy only with their most recent efforts, Doomsday Machine and Rise Of The Tyrant. Sure, while there may be some very nice solos and generally good songwriting, their first three releases outclass their last four in every department. Starting things off we have 1996's Black Earth, a dark, heavy, fast debut that set the stage for one of the better melodic death metal bands to come out of Sweden in the 90s.

Black Earth begins with the poundingly fast "Bury Me An Angel", one of the best cuts on the album characterized by what made Arch Enemy and the Amott brothers well-known: catchy riffs and great melodies with fantastic solos sprinkled throughout. This trend of quality continues with the next few tracks, "Dark Insanity" and "Eureka", the latter being my personal favorite on here, having some of the best riffs the band ever recorded. Following that we have "Idolatress", with a catchy-as-hell chorus. "Cosmic Retribution" is another fine song, this one with a rare acoustic lead with a distinct Latin flavor. The last two songs are also great, packed with Johan's snarling vocals and Daniel Erlandsson's blasting drums, leading to the rather abrupt ending. The first of the bonus tracks available is "Losing Faith", which has a nice headbanging feel to it and fits well on the album. Finally there are two Iron Maiden covers, "The Ides Of March" and "Aces High", both of which I am not very fond but aren't without their charm.

Unfortunately no album is without its flaws and AE's are present here. The riffing in some spots is so simple and repetitive that it can be hard to distinguish one song from the next until the inevitable stuck-in-your-head-for-days chorus or face shredding solo. The lyrics can be a bit painful as well, but only for a few lines at a time, never for an entire song. The biggest disappointment here are the two brief instrumentals, "Demoniality" and "Time Capsule". Both are short and rather uninspired sounding and I end up skipping them when I listen to this album. AE's talent for these tracks would only be heard on their follow up to BE, Stigmata. One final flaw that I find here is the length of the disc, only 32 or so minutes.

Black Earth is not the best album that came out of the Swedish melodeath explosion, nor is it the best effort from Arch Enemy but it is still a solid album full of great songwriting and awesome solos that deserves praise and recognition amongst their growing discography.