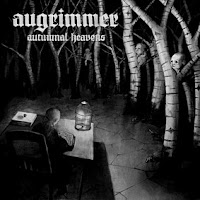 This is the German trio's first official release, releasing through Northern Silence productions, after a demo in 2007. It features four tracks of dense and somber black metal, though I wouldn't go so far as to call it depressive.

The EP has a good sound to it: the bass plucks right along below the thick walls of atmospheric riffing, while vocalist 'Satan' has a pretty thick growl for the black metal style. The band doesn't draw any immediate comparisons for me, they have a pretty fresh approach to the style. After a grim spoken word/noise intro "The Sombre Cabinet", the title track flourishes with its mix of subtle acoustics and then the emergent and aforementioned, driving chords. "Of Endless Fall is the Land Below" is another simple and straightforward piece with some faster guitars that break into slower chords for a nice effect. The bass is pretty good here, making the bridge riffs catchier. The final track "Spectres of Mortality" was my favorite on the EP, I enjoyed the mid-paced verse riff and I love the way the vocals sound, grim yet sparkling.

At first I was going to give this a pass, but after a few repeated listens it sunk its hooks into me. It's a good start for this band and I hope they will release more and harken themselves to the ever swelling ranks of the German black metal scene. Worth hearing if you like your black metal grim, simple and a little sad.