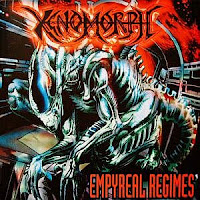 Not to be confused with the Dutch band who released a few mediocre progressive death metal efforts years after, this Xenomorph was instead one of the rare extreme metal acts to hail from the state of Nebraska, where you'd expect they might be branded heathens early on in their career and chased by farmers with pointy implements straight across the border. Unlike the Netherlands Xenomorph, this one seems to have directly incorporated the H.R. Giger designed movie creature straight into their cover concept, but sadly this is not an Aliens death metal concept album. Empyreal Regimes initially got released in 1995 to a small audience, but Dark Descent have decided to issue the cult-classic with the Subspecies demo (1993) as an added incentive to finally check it out.

Being fascinated with the development of death metal and other genres, I'm always curious to experience the parallel evolution of sounds in various scenes. As one might expect, Empyreal Regimes is not a connect-the-dots of Florida or Swedish influence, but rather a grueling sound that incorporates a lot of grinding and thrashing substrate and vocals that are more barked out and bloody than guttural and bludgeoning. For some reason I was reminded of Martin Walkyier of the British Sabbat. This guy doesn't have the same charisma or range, maybe, but he does sound like Walkyier's lower, forced rasp, and the churning of several of the guitars in songs like "Wehrmacht" reminds me of Sneap's tone. The drumming is dense and loaded with thundering double bass that would nearly overpower the guitars if the album weren't mixed appropriately, but it is, and the result is reminiscent of the earlier Incantation records.

That said, it feels that the production was different on a number of the album's tracks, even if we disregard the demo. Tunes like "Inducted Throughout Time" and "Valley of the Kings" feel more grisly and raw than the earlier, more ominous tones, though the songwriting matches the same level of dynamics. Xenomorph doesn't write the catchiest of hooks, but they play with their tempos and structures enough that the listener still feels as if they're capable of a wide range, from the Death-like drawl inherent in the "Subspecies" verse to the more grimy, chugging swagger of "The Keep". The three demo tracks included have a far more repressed production quality, but if you pay close attention to their architecture it turns out that they exhibit a comparable level of skill to the newer material, though they're a less compelling experience.

Xenomorph might not have been running with a big budget to record this material, but I think it's clear they had their shit together, and while I wasn't in love with Empyreal Regimes then and don't care for it all that much now, they had the makings of a mildly unique entity. With a few further albums and incremental improvements in sound and songwriting, they surely could have transformed into a distinct voice in Western death, but sadly this would be the whole of it. I can't offer highest recommendations here, since the songs lack the incredible riffs and tangible menace of many other bands in this period, but there was definitely a potential here that might be appreciated by death metal purists who like to find different when turning over a rock.