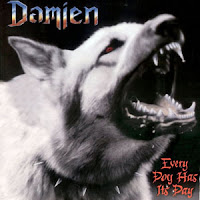 1988 was certainly well advanced into one those breaking points, those 'cusps' in which one metal genre seemed to overtake the last; this in particular being the rising dominance of the thrash current. Thus, the thunder was stolen, the rug ripped out from under a good deal of unsung heroes that were waving the flags of traditional heavy and speed metal the world wide. Damien was one such loss, a band who sprouted up from the middle of the US (Ohio) and produced a string of entertaining records, got just a snippet of video play, and then gradually faded into nothingness, since there is really no way they were going to compete for the attention of the metal teen's allowance against South of Heaven, State of Euphoria or ...And Justice for All. Well, I'm here to say that every underdog WILL have it's day, and that Damien's debut is worth revisiting for its polish and flair, or visiting for the first time if you're new to the trad metal and seeking more substance than the nearest White Wizzard coattails.

Now I said polish, and indeed, Every Dog Has Its Day is cleaner than a well picked-over bone in a kennel of Cujos. The impetus here is on tight performance, big verses and even bigger chorus. Several of the tracks here sound disturbingly like Judas Priest to the point that I might in fact label them a rip-off, of at least the formula if not the exacting characteristics. For instance, the opener "Wolf Dreams" feels like a "Breaking the Law", with tight mid-paced momentum in the verse and an added, familiar tone to the melody leading into the chorus. "Serpents Rising" and "World Affair" almost assuredly found themselves reared on a steady diet of JP '78-82. Vocalist Randy 'Wolf' Mikelson used a similar contrast of bitter low range and Halford-esque screams, with a touch of Joe Elliot, Udo Dirkschneider and David Wayne for good measure. It very soon becomes evident, though, that despite the obvious derivations, there was a creative streak here that manifests in the variation of tracks. Yes, a few of them could be doppelgangers of established financial titans like Priest, but on the whole Damien were practiced and flexible.

And it paid off, from the Scorpions-like strut of "Give Me a Sign" with its spiky verse melodies, to the brazen, galloping anthems like "Season of the Arrow", to even the glorious escalation of the instrumental "Glass City" or its ensuing roadster "Race to the End". But probably the track that so many would remember off this record would be the titular "Every Dog Has Its Day", which screams along like a hybrid of mid-80s Ozzy or Dio and Germans Accept, 'Wolf' kicking the listener straight in the balls with his chorus scream; guitarists Chuck Stohl and Fritz Adamshick tearing up the lead bridge with ease while the rhythm section stayed tighter than the spiked collar of the cover mutt. I won't say it's the best piece here, but it's not a stretch to imagine why it would be chosen for the title and video.

Unfortunately, such indecision can not be applied to which of these is the WORST track. "I Play for You", the mandatory tard ballad is inconveniently wedged into the latter half of the record, breaking its momentum in a crass attempt to bridge Motley Crue and Savatage. Okay, not the worst 'power' ballad I've heard maybe, but clearly not memorable, and the one sinkhole of the album. In the end, Every Dog Has Its Day holds up surprisingly well, partly due to the care placed in its production and partly because, well, who doesn't want some steaming 80s metal to stalk the night for ladies, beer and blow? These men might not have had the ultimate in chops to rival "Fast as a Shark", "Turbo Lover" and "Dr. Feelgood" but they'll do in a pinch, and along with statesmen Chastain, Breaker and Attaxe, should have brought more accolades upon the underground of the Buckeye State. It's never too late, though, and despite a few extensive vacations, the band survives today.