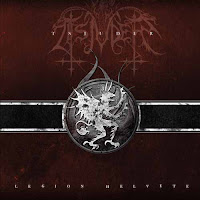 Tsjuder were just developing into one of Norway's more reliable acts in the 'sandblaster' black metal category when they decided to sit upon their withered laurels and give the band a rest. Desert Northern Hell was a true highlight for not only the band, but Norse black metal in the mid-'oughts, so fans might have been disappointed that it had become their swansong. Seven years forward, and well, it should no longer be considered such, for the vicious scum have flung their bloodied, inverted cross spurs back into the saddle for another bonfire dance with destiny. For those concerned: do not worry, the band has not changed all that much, and much of the original lineup has returned here. But this is both a blessing and curse, for while the Legion Helvete remains loyal to Desert Northern Hell, it's not quite as good.

Part of this is that Tsjuder are, and have always been, one of the least distinctive bands to reach their level of notoriety. Solid songwriters, and competent musicians all, but the black metal they perform has always felt its claws along the axis of the pre-established sounds of Scandinavian rogues Mayhem, Bathory, Immortal, Marduk and Darkthrone, and thus they've always felt like an extra pair of blooded gauntlets groping about the cookie jar of darkness. That's not to say that this is necessarily a handicap. Hell, just look at Taake, he's done remarkable things with almost no ability for innovation. But still, when listening through Legion Helvete, one seeking out any unusual abuse or grotesquery will draw only blanks. Without any doubt, this is ferocious, tightly executed black metal for those who like the grimness delivered through both style and skill, but it does lack the immortal songwriting that its precursors excelled in.

As expected, "The Daemon Throne" opens like a volley of hellfire blasting which should peel the paint off whatever religious relic you feel might ward off the band's approach, and you'll notice the band's penchant for the taut, aggressive thrash rhythms that they weave in between their more accelerated sequences. I love the chunky coiled tone of the guitars here, though this is not so noticeable once they get to blasting. Discordant, higher notes are strung along in a fashion not unlike their countrymen 1349 or Emperor, but the band does show a reasonable level of varied tempo here throughout the track list. Even steady blasters like the vile, melodically spiked "Dauðir" or the grating, rapid-fire "Voldsherskeren" are given brief bursts of Hellhammer like mid-paced grooving.

In general, though, Tsjuder are a band for the audience that likes its black metal really-fucking-fast, and as with their past efforts, you'll often feel as if you've just been run off the speedway by an 18-wheeler on its way to a fiendish barbecue. The only issue with this is, of course, as with so many other acts who hold no opposition to hitting the sound barrier, the riffs are woven along very predictable paths, and there are no diabolic secrets contained within any on the album. It's all been done, and Tsjuder simply don't offer any memorable spin upon the genre, and only a few of the streaming, bleeding tremolo patterns on the album stand out far enough that I demanded repeated exposures. For a seven-year gap, Legion Helvete serves as solid proof that these men have not allowed their limbs to frost over, or joints to weaken. Fans of Enthroned, Marduk, or the Polish sect of hyper-blasters will find it appropriately intense, but the top Norse echelon will likely still elude them.