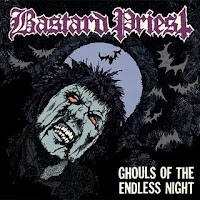 Just over a year out from their surprising debut Under the Hammer of Destruction, Swedish ghoul duo Bastard Priest have returned for an even leaner, cruder follow-up successor which largely follows the same, primal aesthetic spin on punk-driven Swedish death metal. Sort of like a Repugnant, Mr. Death or Death Breath, these guys offer a raw alternative to the formula of forebears Entombed, Dismember, Carnage and so forth, almost as if you spun a bit of Repulsion or Discharge into the mix to capture that borderland between the street and graveyard. Ghouls of the Endless Night is marginally simpler than the debut, and admittedly a sliver less effective, but I really don't imagine fans of that album finding much fault with this.

No time is spent fucking around with characterizations or weaving arbitrary plot threads: this cult flick cuts immediately to the undead infestation with "Pestilence Force", a buzz-saw guitar tone intentionally engineered for a lo-fi effect that mirrors the good old Repulsion classic Horrified. Matt Mendoza's vocals are blunt and bruising, but dowsed in just the right amount of echo to deliver that cold, nocturnal cemetery atmosphere while the riffs alternate between tremolo love letters to the late 80s and d-beat style chord patterns. I was pretty taken aback with songs like "Enter Eternal Nightmare" which featured simpler fast picked rhythms redolent of the early Death sound (Scream Bloody Gore, Leprosy), but then, the entire attraction to a band like Bastard Priest is their ability to transmute nostalgia into the now, lifting the veil of archaic evil which so many modern death metal recordings are almost wholly lacking. They also do it with a bit of variation, knowing when to hurl in a tinny, wicked sounding melodic lead or a rush of unexpected atmosphere like the flanged, distorted bridge in "Sacrilegious Ground".

Complete with its cult, b-movie like comic art and straightforward lyrics that usually deal in the apocalyptic end of humanity by means of zombie hordes (title track), malign spirits ("Enter Eternal Nightmare") or atomic fallout ("Enormous Thunder of the End"), this is a pretty solid fit for nights of Halloween revelry, cruising the autumn fields and back roads after a an evening binging low-grade horror flick classics with your mates. It's not complicated (neither was the last album), but it's more novel and atmospheric approach to the rearward glancing Swedish death is decidedly more refreshing than many others in this field who simply lift and paraphrase the components of Left Hand Path or Like an Ever Flowing Stream. Ghouls is more the bastard stepschild of Left Hand Path, Scream Bloody Gore and Horrified, and if such parentage seems as if it might appeal to you, then you should damn well check it out.