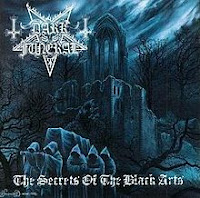 The Secrets of the Black Arts is what I consider to be the epitome of 'generic Swedish black metal' album, with its Abyss studio production and predictable riffing patterns that attempt to bring its Norse and Bathory influences into a mildly more accessible medium. That's not to say that I actually dislike this record, because in truth I have oft spun and enjoyed it through the years, but there is nothing remotely menacing or terrifying about it that I've been able to pick up in the last 15 years. It becomes obvious pretty early why this band has so divided the black metal audience, turning some off entirely from not only Dark Funeral but almost all of the Swedish scene, while others simply revel in its mindless, middle of the road blasphemies.

This is not only the band's full-length debut, but the last of the 'original' Dark Funeral lineup, with only guitarist Lord Ahriman going on to its successor, the faster and more vicious Vobiscum Satanas (but still just as generic). I recognize this era in particular for Themgoroth's fuller, more brutal vocals than on ensuing albums, though the riffing sequences are largely the same sort of chord progressions you'd expect: not nearly so high strung or melodic as Dissection, and a bit thicker and more fibrous than those of earlier Marduk. There is no question really of each members' prowess in punishment. Equimanthorn was a beast on the kit, blasting steadily along beneath the lattice of Blackmoon and Ahriman's riffing and Themgoroth's present if standard bass lines which seem to just gallop along to the beat.

From the compositional angle, though, The Secrets of the Black Arts doesn't offer a whole lot of standout tremolo note progressions other than to merely due justice to the deep blue, eerie shading of its cover art. Tunes like "When Angels Forever Die" or the titular "Secrets" burst along a hurried, unhallowed axis with some only a slight cognizance of rhythmic variety, but even when the band takes a dip for a more broad, open mid-pace ("Satan's Mayhem", or the double bass driving of "My Dark Desires"), the structure of the riffing doesn't get any more interesting. The Swedes are more interested in muscle than complexity, and to that extent they succeed in achieving a sound somewhere between Those of the Unlight and De Mysteriis dom Sathanas, which is all some might ask for.

Yet despite the density of the band's assault, the album feels a bit too level, and since they lack the symphonic rigor of an Emperor or the subtle pathos of a Burzum, the album doesn't ever really grab its audience. It feels all too plain, a textbook exhibition of strength and sacrilege that never leaps first to mind when one is in the mood to revisit the mid-90s boom. I realize it's all the rage to accept this album (and the previous EP) while reviling the band's later worth with the changed lineups, but I'm entirely forced to disagree. I found at least their 2001 album Diabolis Interium to have a far more engaging, fevered and intense riff-set, but certainly that would not have been possible without laying the bloody brickwork here.

I might find myself unable to listen through their monotonous cover of Von's "Satanic Blood" here, but if I'm really in a crunch for stock hellblast velocity, the originals on The Secrets of the Black Arts offer an adequate thrill ride. It's not original, it's not innovative, it's not particularly dark or catchy and it's far from the top of its class, but the consistent lyrics and infernally fueled energy build some semblance of atmosphere despite themselves, and if you're in the mood for what Dark Funeral is brewing, provides enough satisfaction.