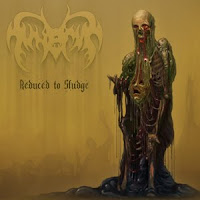 Before anyone gets their panties in a bunch over yet ANOTHER of these retro old school death metal acts to emerge, know that this particular act, Funerus has been around for over 20 years now, producing a string of demos in the early 90s and then calling it quits until such as a time as they resurfaced with Festering Earth in 2003. So, this is not some newfangled cluster of crypt-dwellers, but an already established act with much collective experience. One of the other original members, Brad Heiple has since left the band, but Jill and John McEntee forge on here with drummer Sam Inzerra of Mortician and Morpheus Descends, to produce what is damned easily their best recording to date, crushing the debut.

Of course, I've already given away that this is old school death metal, and so I'd might as well slip that there are clear parallels to the sounds of Autopsy, Asphyx, Cianide, and Incantation (John's better known outfit), and Floridian forebears like Obituary and (old) Death. But, why the hell not? The band's got some of the originators in its very ranks. Reduced to Sludge hits a new standard in production thanks to a pretty sleek job by Swedish veteran Dan Swanö, and you can really feel both the tumultuous undercurrent of the drumming, the burden of the riffs as they course through both gnarled death and sewer doom passages, and perhaps most importantly, they sport one of the best female vocalists in this entire business, with a ghoulish delivery matched only by Corinne van der Brand from the Dutch pioneers Acrostichon. This fits all too naturally over the lattice of crushing, open chord grooves and cutting muted sequences that provide the framework for most of the tracks here.

What Funerus manage to provide here that a good many of their younger contemporaries seem to miss is that death metal can retain its inherent, brutal force while engaging in at least some degree of variation. Sure, almost all of the tracks are cut of the same general cloth, but you have the ability here to distinguish between them. For example, "Death of God" has an almost warm fiber to its post-verse riffing that flows straight into an amazing bridge that wouldn't have been out of place on Death's Leprosy; while "Corroded" and "Time of Death" barrel through you like a fist fight of early Obituary and Incantation. The dark discourse within the music is purely driven by the instruments and vocals; this is not a band who just decide to dowse everything in an excess of reverb, and you won't hear synthesizers used as a central component.

There's not much to harp on here, with the possible exception that these are not the most exorbitantly unique or standout tracks in the genre. There aren't many individual riffs on the album that will have you repeating the album endlessly. Since there are so many thousands of records out there in the field already, it's more a case of standing on its principles and delivering a package of purity for its medium. To that effect, Reduced to Sludge succeeds, and it's a solid, enjoyable experience that feels intensely old school without sacrificing strong production values or using any 'tricks' to seem more cavernous than it really is. Jill is a bruiser on the microphone, the riffs and drums are tight, and you certainly feel as if you're being swallowed by the titular sludge, choking it in as your organs cease their functioning.