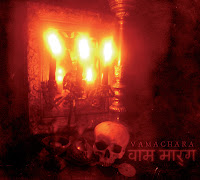 Acherontas finally peaked out with Theosis, a studied contrast in both turbulent compositional style and eloquent leads and melodies which married well to their occult lyrical inclinations. The Greeks seemed to have carried the Scandinavian influences of their years as Stutthof to a new level of awareness that they infused with their own, personal identity. Frankly, they had been scaling in quality so much with each new record that I fully expected their latest effort Vamachara to be the stuff of instantaneous legend. Sorry to say, that's not quite the case here, as the band seem to have leveled off, but where the album does surpass the sophomore is in its production values, which are far less jumbled than Theosis or Tat Tvam Asi.

Impressive are the ritual invocation vocals to "Opening the Eye of the Storm", Acherontas V.P.9 pouring his all into a ghoulish recital with layered horns, synthesizers and whispers. After this, the band storms forward into the "Blood Current Illumination" tremolos lines glazed in sparser melodic notes while the drums blast away thuggishly below. Clean vocals, soaring and mumbling are sent out into the vortex of rhythms, and all of it feels a lot more polished than Theosis, if not one iota shallower in composition. "Abraxas" follows with brazen walls of crashing chords against an empty backdrop, before its own alchemical conversion to thunder; while "Vamachara" itself is a pretty straight Scandinavian styled blast-off similar to Marduk, Dark Funeral or Emperor. Far more interesting, though, are the tracks "Ohm Krim Kali", which is all exotic mysticism given flesh by ominous prayers, rampant percussion and strings that make the listener feel as if he or she is in some sorcerous bazaar; or "Drakonian Womb", the 11+ minute finale which has a lot more variation than the earlier pieces.

Sadly, the more fascinating tail end of Vamachara lends it a certain lopsidedness. Most of the earlier metallic tracks are pretty much par for the course, with uninteresting blast sequences and not a lot of memorable notation outside of the few gleaming melodies coming to the fore. The vocals seem disjointed and confused, even though there are periods on the album in which Acherontas himself excels...like the opener. In summation, it feels like a giant, ritual mess that wants to be so more much than its rather average black metal trappings will allow it for, and the fact that the musicians are obviously very capable doesn't really work out in its favor. The previous album also had of confusion and distraction in its mix, but somehow that seemed to work in its favor, where I spent most of the time in Vamachara waiting for something to stick. It's certainly a competent effort (Acherontas have yet to release a bad album), but it's not yet the masterwork this outfit is surely capable of scribing.