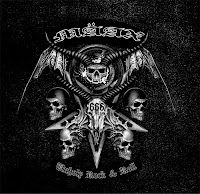 There seems to be no shortage of younger bands out there infusing the vintage realms of speed, thrash and heavy metal with a more aggressive, 'current' black metal edge in the vocals and atmosphere. Thankfully, they tend to draw upon such a wide palette of influences that very few feel quite the same. For example, Midnight feels little like Kvelertak; Speedwolf little like Gravehill, and yet they all seem bound for a similar audience. Enter Indiana's Maax, who wear all this 'black & roll' on their sleeves, with logo and album artwork that would literally make for an eye catching tattoo, and offering a blend of similar aesthetics to those you'd find in the aforementioned acts. I wasn't quite so taken with the previous release I had heard (their Six Pack Witchcraft EP last year), but persistence has clearly paid off.

I might not be singing or remembering Unholy Rock & Roll a few months hence, but at least it is fun while it lasts, and there are at least 2-3 genuinely good tunes that make up for any of the filler. As hinted, there are a wide array of influences on the album, from the filthier side of the NWOBHM spectrum (Venom and Motörhead) to the formative Teutonic black/thrash of Sodom, Kreator and Destruction; with a healthy helping of Kill 'Em All or Celtic Frost. This manifests in a good deal of variation between individual songs, so you'll have something like "Fight With Fire" which feels like a mix of old Metallica and Kreator's "Riot of Violence"; or "Do What Thou Wilt" which incorporates a smudge of straight old Judas Priest trad metal with the blacker, barking vocals; or the band's namesake "Maax" which is pretty much barroom punk metal bred for broken glass and morning after regrets. Curiously enough, my favorite track here was "Overthrone", which is a mix of driving, tremolo black metal with these ominous, churning death metal breaks.

The point is: with Maax, you've got options. Perhaps none of the constituent sounds going into this record are so pronounced or volatile as you'd find them in other places, but they tend to handle everything well enough in this mixed punchbowl of punishment. Almost as if someone hurled a bunch of vintage metal tees and denim jackets into a cauldron, added a whole lotta whiskey and absinthe and then stirred the shit out of it and handed you the ladle. I enjoyed the deep, dark fuzz of the guitar tone and the bruised bluntness of the vocals, and in general the riffs hang with the ear, even if they don't really fashion into the most striking of patterns. But it's not as if the band set out to write Powerslave or Det Som Engang Var. This isn't 'deep'. No, this is meant to kick in the ribs of the opposition, spit or urinate on its victims and then hit the road in a high speed motorcycle escape from the local authorities. To that extent, there's nothing wrong with it. Unholy Rock & Roll, just as was advertised.