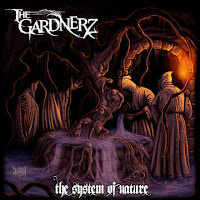 Swedish initiates The Gardnerz took me quite by surprise, not due to their unusual moniker, but by their rather unique approach to the hybrid of doom and death metal which is a bit trickier to classify than the garden variety drudges who generally inhabit the genre. You can clearly hear the roots of My Dying Bride, Anathema, Paradise Lost or Officium Triste in this sound, but the stark melodic walls they superimpose seem more akin to fellow swedes like Memory Garden or Candlemass, if they implemented layers of growling and snarling more like a grind or death metal outfit. They are also fond of interjecting calm contrasts into a lot of their songs, with flows of thick bass and cleaner, slightly affected guitar tones.

It doesn't always work that well, but the overall aesthetic is one of a some bone carved galleon on a sea of crushing and tranquil emotions that seem to shift on a normalized basis. Prime examples include opener "The Art of Suffering", which transforms from an elfin eloquence to these massive dual melodies that twine beneath the guttural foreman; or "Flaw in the Axiom", which has these epic, gliding guitar lines but builds into complexity to create a more exotic, hammering rhythm after the bridge. They definitely experiment with the riffing, striating cuts like "Incident" or "Born to Consume" with these eerie, scale based departures that one might expect of a more technical death metal act, and most importantly, they understand that doom metal must not be slow, boring and wholly soul-leeching to successfully shower its emotional void upon the listener, even if a few too many of the tunes use comparable techniques and suffer from sameness.

This is far from funeral doom, mind you, but a dynamic formula which never underplays the significance of the guitar riff. The production is giant, boxy and bright, even when converting a few of their obscure influences into covers. Vulcano's "Bloody Vengeance" and Winter's "Servants of the Warsmen" are both tackled here, and they both do a loyal and chunky service to the originals, even if some of the somber mood of the latter is lost with the brighter production. At any rate, I didn't love all the material on the album, and the vocals, while abrasive, are your pretty standard variety growls like a harsher Nick Holmes (his death voice), but the Swedes are onto something here. If they can extract some of their mightier melodic conjurations into some better grooves, and perhaps clean up some of the transitions between loud and soft, then they could easily lurch alongside their countrymen Isole as modern death/doom titans.