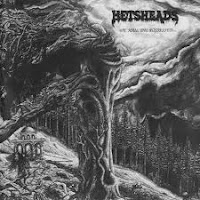 Ignoring the fact that they would evolve into death & roll obscurity Blackshine, Hetsheads were a band on the early Swedish death circuit that were cut down well before their prime. Only two demos were released in 1991, later collected together as this We Hail the Possessed... compilation and issued through Spanish imprint Repulse. That's a good thing, else I might not have ever experienced their music, and in a time when old school authenticity is all the rage in about 50% of the death metal sphere, a band like this is well worth taking another look at. They simply exude this cryptic, antiquated charm through simple, pulverizing riffs that most fans of the stripped down approach to the medium will very much appreciate.

Obviously, Hetsheads were not without their local parallels, and one can certainly hear a kindred spirit in the early Entombed/Nihilist recordings, Grave, Carnage, Seance, God Macabre and so forth from the same period. But they're not exact doppelgangers of any one such sound, and there's often a plodding Bolt Thrower undertow here, not to mention a few nods to the Florida godfathers Death or Obituary. The guttural vocals have a similar, dark intonation to Left Hand Path or Into the Grave..., and they drown their guitars with this oozing, syrupy thick distortion which likely wouldn't have functioned with more complex compositions. This applies more to the Remonstrating the Preserver demo material which comprises the first half of this collection; the latter promo tracks have a more organic, boxy tone to them which trades off some of the churning charm for clarity.

And I must admit, I prefer the former to the latter in terms of its resonant, sluggish effect. Songs like "Dissolution by Catatonia" and "Paganization" crunch along with caveman simplicity, yet their charging currents can't help but evoke nostalgia in the old timer. I also really enjoy the intro to this demo, with it's acoustics and synthesized choirs; not to mention the gimmicky finale "Brutal Exhordation", a shorter death metal piece with a simple, thrash riff and down-pitched, toilet bowl gutturals which to be honest I wouldn't have minded on all the material... As for the other promo tracks, "Cast in Silver" is ghoulish and driving d-beat fueled mayhem, while the more corporeal "Phlebotomize (Fade Away in Silence)" is slower, grooving death/doom with a few mammoth riffs and bass breaks. "When the Time Has come" flirts once more with the clean guitars and synthesized atmospherics of the demo's intro; and "For His Sake", while average, has a decent groove in its later half.

Despite the fact the band never really hit their stride, We Hail the Possessed... sounds solid enough for decades old demo material. Especially in today's environment, where bands are striving in earnest to reproduce this mentality on a modern recording. Hetsheads are far from the most memorable and complex band from this crucial period in European death metal, but their music was fully enabled to drag the listener deep into its churning, grotesque horrors with a bucket of guts to hurl straight in his/her face.