Sanguis Imperem - In Glory We March Towards Our Doom (2011) 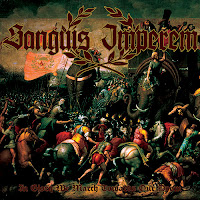 Though Sanguis Imperem have been honing their artillery for a good five years now on the Californian underground circuit, my initial exposure to them was only last year with their contribution to the Imperial Impurity split with mates Nocturnal Blood. In fact, most of this band serves as the live support for that one, but their styles are not exactly the same. Sure, both are performing retrospective flavors of death metal, but Sanguis Imperem have their sights set on a mixture of Morbid Angel, Bolt Thrower and Immolation rather than the graveyard chills of that act. For what it's worth, the material on this debut full-length In Glory We March Towards Our Doom seems a step beyond their split content, in quality if not in stylistic evolution.

They open this with a brooding, evocative acoustic piece which gradually cedes to a floe of dire melodies, churning groans and steady beats leading up to "The Scourge of Man", over which the vocalist lets loose an abysmal guttural while the riffing begins to take shape. This is pretty standard tremolo and mute picking composition with drudging chord breaks, and a lot of double bass. Where the varied snarls and growls erupt in conflagration, I'd compare them to a mix of Bolt Thrower and classic Deicide, but with a lot of that assured darkness you might recall from the early Immolation records. These guys are wise enough to mix up the pacing where necessary, so they'll alternate between sheer battering ram hymns like "Possessed by Violence" and "Praeternatural Order" with a bit of slower, death doom in "Pathetic Obsecrations" or "Strapped to the Crank Wheel" (great song title there). Otherwise, it might have gotten a bit monotonous with all the double bass and predictable blasted patterns.

In Glory We March... has a dense, rich production which is well suited to its charnel impulses, and the guitar tone is fit for grinding and cleaning bones to wear as trophies for surviving its warlike atmosphere. That said, my biggest gripe with this album is just the same as so many others out there. Despite all of Sanguis Imperem's competence, genuine admiration of their influences, and crushing certainty, there are just too few exemplary guitar parts on the record, if any. The riffing is entirely un-ambitious, settling for average patterns that all bear the burden of familiarity to anyone who has been listening to death metal in the 90s. I'd love to be thrilled by some surprise or amazing breakdown somewhere in the songs. Some greater variation. Some more atmosphere as I heard in the intro "Nil Igitur Est Mors Ad Nos". But neither of those traits are forthcoming through the album, so while In Glory We March... constructs a functional foundation for the band, and it's never flagrantly dull, it seems to settle within its boundaries rather than ever stretch the presets.