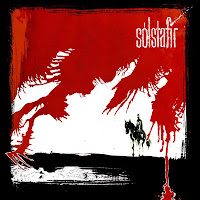 It won't come as a shock to anyone that Iceland's Sólstafir have by this time severed almost all connections to their black metallic roots, seeking to further themselves in the psychedelic, airy post-rock that their gloomy masterwork Köld first manifest. Gone are the snarling, tremolo patterns and aggressive tendencies, and with their new double album Svartir Sandar, gone even is the absolute bleakness of that last album. Pretty much the entire core of the band remains, so it's not as if there were some disagreement and a few of the members suddenly hijacked the band's direction: this is the sound the band will likely continue until further stages of evolution have manifest. As for Svartir Sandar, the problem isn't so much that the music has taken a dip in quality, but that there's just a little too much of it, and not all of these creations are equally poignant or memorable.

There aren't enormous differences across the discs in content, and with a total of about 78-79 minutes of music, I'm wondering why they couldn't have just squeezed it onto one. Surely this would have proven less expensive? At any rate, the musical content is a lot like Köld: desperate swells of driving post-rock angst alternated with periods of spacey, open calm. Vocalist Aðalbjörn Tryggvason is mildly more intense this time out, with an angry bark to his style that reminds me of the shouting parts form the old Fugazi post-hardcore records. Simple, distorted bass lines create a substrate of leaden grooves while the guitars are dowsed in reverb or other effects and left to simmer and settle atmospherically, or escalate into explosions of shoegazing majesty as in the thundering bridge of "Ljós í Stormi" or the title cut. There are a handful of tracks which might seem 'excessive' in duration (10 minutes or more), but thankfully these don't drone on endlessly under any burden of monotony.

What saves the experience from ever growing stagnant is the amount of texture and variation on exhibition. While a number of guitar melodies and bass lines might utilized familiar sounding patterns, they are approached with such a beautiful, ailing breadth that they can't help but to feel fresh upon the ears. The band has incorporated some lofty, angelic female vocals on a number of tracks which are breathtaking, and there are also electronic beats and pianos (as in the song "Kukl") which feel resplendent against the music's snowy late afternoon glow. There aren't many moments on the album which would feel 'heavy' from a metal context, but that's not to say the band don't ramp up the intensity where it suits them; i.e. the screams cutting through "Þín Orð" or the jarring, accessible discord inclement to "Sjúki Skugginn"'s bad weather. There's also a bit of the Cult-like rock and roll aesthetic from the last record, but if feels more heavily confined to the second disc tracks like the instrumental finale "Draumfari".

All told, there's much to experience here, and what Sólstafir might lack for in the complexity of their earlier material they compensate for with volume and emotional contrast. That's not to say that Svartir Sandar feels as cohesive or astonishing as its predecessor: it runs on too long, and there are certainly moments in which the mind begins to wander AWAY from the soaring and soothing sonic landscapes and into thoughts of listening to something else instead (particularly true of longer pieces). The production is beautiful here, delivered with bruising clarity, and fans of Köld will not be heavily disappointed by the music or the lovely artwork panels. The album might also appeal to fanatics of other aerial post-rock acts, and should earn them due comparisons as a more 'rock-fueled' variant to their popular countrymen Sigur Rós.

Posted by autothrall at 7:59 AM