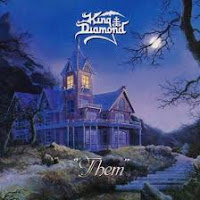 Landing dead center in one of the greatest streaks of recording in all 80s metal, "Them" is the third conceptual horror piece from King Diamond, elevating the Mercyful Fate crooner's solo career from the blood-lacquered woodwork into the spotlight thanks to a fairly steady amount of airplay for its "Welcome Home" video. Honestly, I can't remember even his alma mater's works receiving the same hype that this album did, and for many this was a first exposure to the shrill falsettos, airy riffing and elegant leads that make his music so damned memorable. A few lineup changes were made, with Pete Blakk replacing Michael Denner and Hal Patino taking over for Timi Hansen, but otherwise this is a pretty straight evolution from the tremendous sophomore Abigail the year before.

As for its subject matter, "Them" is the story of a boy being haunted by ghosts and his grandma, and really there isn't much more to it, though it's continued through the following LP Conspiracy. Personally, I've not found all of his concepts to be equally engaging. Fatal Portrait and The Eye are stirring enough, but I couldn't really care for such hauntings as are explored here. That said, as a musical score to such a theme, this album functions brilliantly. The evocative cover image of the rural haunted house against the withered trees and moon is a perfect match for the eloquent aggression. Andy LaRocque's leads are a highlight of the album, almost always memorable and creating added dimensions to the songs, rather than just indulging himself (even if his technical ability is unquestionable), and though cheesy as all hell, the intros and interludes work to move the story along rather than feel out of place.

But for its central, metallic components, there is not a single track here I'd throw under the bus. "Twilight Symphony" is a particular favorite of mine for the arching chorus and the march-like meter of the verse guitars, but each piece is a wonder of straight-up trad metal with an almost thrashing fervor to its grooves. For example, the intro riff to "Welcome Home" has a lot of light chugging between the blissful lead breaks, while "The Accusation Chair" hammers along below it's gleaming bridge solo. If you're looking for a straight heavy metal headbanging nexus, you've got the opening to "Bye, Bye, Missy", while other pieces like "Mother's Getting Weaker" and "A Broken Spell" take a melodic power metal role as they plummet along to their own individual climaxes. Even where they dip into acoustics, like the titular interlude, none of the quality is lost, and the result is an album of well structured dynamics.

King Diamond put up quite a pantheon of recordings from 1986-90, and while I would not count "Them" as the best of them, that's only because I slightly favor the songwriting of its predecessor Abigail and the beautiful, witching woe/atmosphere of The Eye. There are a few riffs here which don't completely stick, and "Out from the Asylum" and "Phone Call" are just too cheesy despite their narrative importance in helping set the story. The lyrics are almost all narrative and dialogue. That aside, this album is worth every cent you'd pay for it, ten times over, as is the followup Conspiracy. That a single band could release five albums straight of such strength is remarkable. With the exception of maybe Slayer or Rage (from the same period) I can't really think of others who accomplished such a feat, and that's even if we DON'T include the Mercyful Fate stuff.. "Them" is superb, spectral, and for the most part, unforgettable: all hail the painted King.