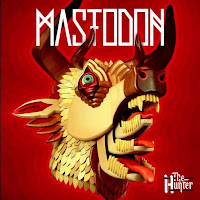 Mastodon are one of those bands that have achieved such a high level of visibility and success that they can do no wrong in the eyes of some, and do no right for the ears of others. To their enormous, rabid installed fan base, they are considered geniuses, the 'salvation of extreme music'. And frankly, were they to release an album of syncopated projectile vomiting, these folks might still revel in it. On the other hand, to their detractors, they're the prime suspect in the whole 'hipster' crowd, i.e. metal for people who don't like metal. Some of this is the typical rebellion against all things popular which has always been a staple of the underground, and some is just the xenophobic whining of emos in hesher clothing who seem terribly convinced of their own purity when they can be bothered to stop sniffing their own bodily fumes. Others really just don't like the music Mastodon writes. Hey, it happens.

Personally, I have enjoyed the band to this point. In particular their 2006 opus Blood Mountain, an album I found brilliant to the degree that it remains in regular rotation in my car stereo five years later. A hybrid of groove and progressive metal, hardcore and the unique leanings of acts like Voivod, F.U.C.T., D.B.C., Today is the Day wrapped up in the flesh of rustic folklore and prehistoric fascination? Sign me up. Their earlier, progressive sludge stuff like Leviathan and Remission was perhaps not so revelatory, but nonetheless good. As for Crack the Skye, I had a more mixed reaction. The album felt as if the band were attempting to capture a fragment of Blood Mountain's more progressive rock leanings and then extend it out into a full conceptual piece which was far less exhilarating, and I've only rarely summoned up the urge to experience it further.

Two years later, they've come back with The Hunter, their most user friendly and commercially accessible jaunt to date. Many have drawn a parallel between this and Metallica's 'dumbing down' on The Black Album, which is an apt comparison, if not entirely accurate. Things have changed, in that the band are writing obvious, layered melodic chorus vocals, and occasionally simpler guitar rhythms. Yet others haven't. One trait here that really ties this record into the past few is Brann Dailor's excellent drumming, which remains nearly as busy as Crack the Skye, if never so much that it outpaces or outdistances the musical plot. In general, the musicianship is still cracking throughout, the varied tempos functional in keeping the ears glued through both the sparse bouts of manic intensity and the glistening vocal candy. And this is one area, perhaps, in which The Hunter deviates from past patterns.

While something like Blood Mountain was as a general rule heavy, with only a few moments of bliss ("Pendulous Skin", or the wondrous climb of melodies in "Sleeping Giant"), this is a much more 'even' balance of the two poles. You've got dreamy, mesmeric pieces here like finale "The Sparrow" over which the vocals sooth and soar like a lost Pink Floyd ballad, or "Creature Lives", my least favorite track here which uses a lot of the open air choral vocals you might hear in Fleet Foxes, The Arcade Fire or the moodier Beach Boys tunes. This experimentation isn't by default bad, I just found the guitars and the overall structure of the song pretty bland, predictable and empty. Then there's the song which is basically a straight up stoner rock piece, "Curl of the Burl", redolent of Corrosion of Conformity or Monster Magnet but with a lame chorus: It's just the curl of the burl/that's just the way of the world/it's just the curl of the burl. Really? Or how about the unfortunate "Blasteroid", which sounds like a Southern inflected Foo Fighters until it grows some balls for the spastic dissonant snarling metalcore of the bridge.

But all is far from lost, and there are a handful of tracks here which I'd consider genuinely appealing. Opener "Black Tongue" has some solid, escalating riffs and somewhat of a black, space rock atmosphere to it, and reminds me quite a lot of Blood Mountain. "Spectrelight" stands out to me for how the angst-ridden vocals slice straight through the thick, muddy grooves of the guitar. And "Bedazzled Fingernails" is a compelling pastiche of clean, jangling and swerving guitars with more of the psychedelic, layered vocals that stand to memory long after the song fades. I would be remiss to not also mention "Octopus Has No Friends" or "All the Heavy Lifting", which are both fairly interesting forays that bridge together the heavy, melodic rock influence with a lot of adventurous guitars courtesy of Brent Hinds and Bill Kelliher.

A band like Mastodon can afford to make their album sound crystalline and huge in accordance with pop and mainstream rock standards, and so it's only natural that The Hunter is prim and proper enough to allow all its instruments to breathe. There is no question that the quartet has put an enormous amount of effort into the arrangements, in particular the vocals, which all the band members contribute towards. They're still technically inclined and 'progressive' without ever coming off showy or overly indulgent, but regardless this is a safer album geared partially towards a wider rock audience, and thus some of the tracks are vapid and unmemorable to the point that they feel as if they soil the rest. 5-6 of these would have made for one hell of an EP, but I could do without the padding, and I found the lyrics here far less poignant and stunning in their imagery, loaded with cliches and nonsense that I simply don't expect from this band.

In the end, while I 'like' The Hunter, and it's not nearly the disaster it might have been or that some might claim, it does not hold up to their earlier full-lengths. Never before have I felt the urge to actually skip songs on a Mastodon release (I don't visit Crack the Skye often, but when I do, I plunge straight through it), but it's all too easy to cut something like "Creature Lives", "Stargasm" or "Dry Bone Valley" out of the play list altogether. At the very least, I hope they've shaken some of the chinks out of their armor with this album and will turn the ignition key for the future. And write some fucking LYRICS next time.