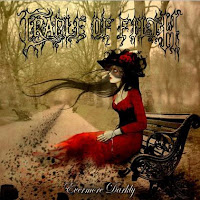 Evermore Darkly might not be the first of Cradle's filler EPs, but it's probably the most substantial, packing a bonus DVD that includes a video documentary, their live performance at the June 2011 Graspop festival in Belgium, and the incredibly cheesy video for the track "Lilith Immaculate" from last year's surprisingly tight full-length Darkly, Darkly, Venus Aversa. The live tracks are actually not so bad, as I've certainly heard worse from Dani's oft-ailing vocals that only rarely seem to sound as good as on the studio efforts, and they mix up present and past material rather well. On the other hand, the official video is a testament to awful Gothic metal vanity, and not worth bleeding your eyes out to experience...but then...this is the problem with about 90% of metal videos. I'm always amazed that a band like CoF can put so much effort into lyrics and concepts but then shit out videos which look like overblown fetish lingerie commercials.

Anyway, of far more importance to the Cradle of Filth fan will be the first disc in this set, upon which the Brits ply their trade with a selection of 'remixed' or extended album tracks and a few unreleased pieces. "Lilith Immaculate" gets blown out to beyond 8 minutes, 2 more than the full-length version, and frankly the added bits of orchestration aren't all that necessary. The more rock driven "Forgive Me Father (I Have Sinned)" is given two alternates: one, the 'Elder' version mix, and the other a pretty cheesy techno-trance rendition. While I've no opposition to snarls or growls over dance music or industrial (have dabbled in it myself), the mix of Dani and Caroline here seems only to detract from what might be half-decent generic club electro, glow stix not included. There are more of the 'Elder' versions for the tracks "The Persecution Song" and "The Spawn of Love and War", but while these aren't necessarily bad, the differences are just so inconsequential that they feel like their job is simply to fill space...

Of the non-album material, there's a sampled monologue intro piece called "Transmission to Hell" which relates the tale of some fell Siberian mining expedition, but the interjections of 'hell' into the narrative render it silly rather than spooky. Then there's "Thank Your Lucky Scars", a pretty straight shot of black metal for Cradle of Filth which has a lot more driving orchestral melodies and tremolo riffs than they generally use (think back to Dusk and Her Embrace), but still breaks into a groove. Lastly, there is the orchestral/instrumental version of "Summer Dying Fast" from way back on The Principles of Evil Made Flesh. This is perhaps the most interesting single track on this release, if only because the other good songs are already better received on the recent full-length, and this 'Midnight in the Labyrinth Breadcrumb Trail' mix at least makes for passable, corny Halloween music...

Sadly, there's just not enough here that I'd recommend to anyone who isn't already a serious fan of the band, and who would be interested in the various tweaks and takes that they've decided to sell you. Do you really need or want remakes of this material? Similar to their 2001 album Bitter Suites to Succubi, which featured some similar revisits, my answer to this is no. It's not short on content, I'll grant them that. The live set is cool, the cover art classy perhaps, but in the end, the carrots at the end of this stick are spotty at best, and if the band's not dishing out a cool concept album like Cruelty and the Beast or Midian, I couldn't care less.