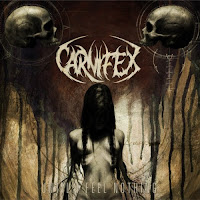 I'd be lying to claim that California's deathcore tween queens have produced anything besides a glossy, bludgeoning amateur hour to date, and yet their last record Hell Chose Me at least showed some minute traces of promise that the band could write and hold a riff in betwixt their underwhelming tendency to poison compositions with the most crass, formulaic 'been done' crowd pleasing pit chugs on their side of the Mississippi. Once upon a time, when it mattered most, hardcore bands, some of which later evolved into metalcore and then 'deathcore' bands, wrote emotional and important music and the crowd responded with their bodies. A breakdown wasn't just shoved into a song haphazardly, it was fresh and 'felt' by the audience and actually seemed somewhat powerful.

These days, though, it's a marketing commodity. Chug. Groove. Djent. Growl/snarl mechanically, depending on whether you wish to more closely emulate At the Gates, Carcass or both. Get the brosephs in the pit flailing around, and pick up the ladies (or boys) after the gig. I mention both of those bands, because clearly Carnifex derives much of its riffing inspiration, that is to say, the 'good' riffs here, from such sources, and with Until I feel Nothing, I am quite surprised to find that the band have written their strongest material to date, pushing the envelope a bit further than Hell Chose Me. Slaughter of the Soul era melodic death is crossbred with grisly Heartwork-like riffing, then dowsed in the familiar chugging Meshuggah or Earth Crisis breakdowns and then seasoned with a slight influence from more technical Canadian or New York brutal death metal outfits like Suffocation, Beneath the Massacre etc.

And you know something? For about 20 of the 32 minutes on this album, it actually works out rather well. I can't speak much for the vocals, which are the same competent but forgettable array of growls and snarls that sound like 90% of the deathcore or metalcore bands you've seen gigging in the past decade, but there are moments on this album where Carnifex integrates its varied impulses into something nearing bewitchment. Once the boring horror music gone banal grooves of the intro "Deathwish" disappears, we're treated to a pretty decent slew of riffs in "We Spoke of Lies" that will have all the Black Dahlia Murder fans in tears, even if it feels as if there are just a few too many (riffs). Deeper into the track list, "Dehumanize" successfully fuses spikes of melody over their churning, chugging substrate, and the bridge sequences is actually a pretty sweet escape into a melancholic, almost 'trip hop' before exploding back into blasted melodic death with dual tremolos bristling below Scott Lewis' familiar barking.

There are still quite a few dull mosh sequences here, some of which are bouncier akin to the whole 'djent' thing and some being more of a straight old metalcore onslaught, but to their credit they actually make every effort to dress them up as something more than garden variety fist fighting, where in the past they felt far more like they were just being funneled into the music so it would suit their genre and crowd participation. The production here is pretty much what you'd expect for a band on a good sized label, all instruments balanced with precision and only slightly favoring the guitars and vocals. And the members' musicianship has steadily grown in ability, but that was never really an issue for me in the past, the songs were just dull and commonplace. In addition, though the titles and 'personal' lyric matter here are just as uninspiring as on past albums, with the poignancy of a less 'pretty' Avenged Sevenfold, it feels that, at least on a few songs, some effort has been expended in their creation.

I might have been hard on this band's material in the past, as I often am with genre peers like Whitechapel or Job With a Cowboy, but it's only because I want this music to kick my ass and justify its own existence just like any other strain of metal. I would be thrilled to own albums in the deathcore or metalcore genres which bear the same resonance, passion and memorable writing as I've experienced with thrash, hardcore, death, doom or black metal. Until I Feel Nothing is leagues away from such importance, perhaps, and it's not an album I will likely find myself coming back to, since I'm too old for the mosh-first think-later scene and there are only a few tunes here that I'd dub 'catchy' or worth the time to listen through repeatedly. However, that said, I found this an improvement in most departments from their dreary outings like The Diseased and the Poisoned or the Love Lies in Ashes EP, and they seem destined to configure themselves into much more than they once were. With this fourth full-length, I feel like I'm firmly eating one foot. Next time, I hope they'll have me eating both.