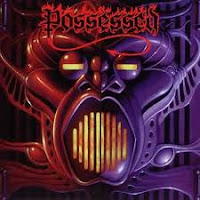 I've often pondered why Possessed would never develop into the powerhouse popularity of their Californian peers Exodus, Slayer or Metallica through the 80s and beyond, but the answer might very well lie in their sophomore outing, Beyond the Gates. Don't get me wrong, I like this record quite a bit, but I can't help but feel that the band had toned their sound down ever so slightly, and much of the raw, ripping appeal of the debut is lost in translation. In 1986, albums like Reign in Blood or Darkness Descends were flirting with faster, more aggressive aesthetics while Master of Puppets was stealing the spotlight with its impeccable songwriting, so it was the wrong time to put on the breaks, and in the long term, it might have cost Becerra and company the race (even if they retain their cult icon status).

That said, Beyond the Gates is still worth hearing and probably owning, if you've got any predilection for occult or horror fueled death/thrash. It's no surprise that Possessed are considered one of the forebears of the 'death metal' genre. Not only did their debut have a song by that title, but Jeff's vocals were ghoulish, a massive inspiration for Florida luminaries like Chuck Schuldiner of Death. The guitars here are pretty straight thrash/speed metal though, with a bit of Slayer-like construction similar to Hell Awaits or Reign in Blood, and the ruddy, muddy tonal constitution that the lesser known Maryland band Indestroy would cop for their s/t debut the following year. Larry Lalonde is nowhere near as eclectic as he'd become for the bands Blind Illusion and Primus, but he and Mike Torrao deliver a firm barrage of dirty speed licks and knifing lead sequences which, while unmemorable on their own, thread a natural counterbalance against the hammering backdrop.

The vocals are not quite so grisly as Seven Churches, and the guitars never so belligerent and bloodied as on a "Burning in Hell" or "Satan's Curse", but it's nonetheless a consistent album which revels in its subject matter. The intro is beautiful, almost like an 80s horror b-movie theme before it cedes to the bludgeoning of "The Heretic", but "Tribulation" is the first real track of note with its faster paced guitars which had a similar momentum to what Metallica were doing at this time. This is even more the case with "March to Die", which charges straight into the great, mid-paced "Phantasm" with its solid verses and mystical, Eygptian breakdowns. Other killers include the bristling "No Will to Live", the writhing leads of "The Beasts of the Apocalypse", and the choppy, mudslinging brigade of "Restless Dead".

There are a few tracks that seem less interesting, like the sloppy "Beyond the Gates" itself or the chugging footnote "Dog Fight", but in general this is a highly satisfying experience with a lot of reverb on the vocals and guitars that place it straight into its mid-80s era. Personally, I'm a huge fan of that sound, but I can understand how some might be turned off that it exhibits less of the brash and repulsive hostility of its precursor. The lyrics are all fairly simplistic dissertations on the typical themes that were also being explored by Slayer, Dark Angel, Venom, and so forth, but they do the trick, and there weren't a hell of a lot of bands doing more than that in the period. Ultimately, Beyond the Gates doesn't earn the Gold medal for Possessed, and would easily be subjugated in any throwdown with Bonded by Blood, Ride the Lightning, Darkness Descends and so forth, but it's a reliable enough ride into Hell.