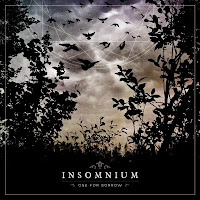 Finland's melodic death mavens Insomnium are not a band with anything to prove. Three of their four prior albums rank among the best of that particular national niche, and while I found the exception (Above the Weeping World) to be a mild disappointment, it was still decent enough and quite highly praised beyond my personal sphere. With One for Sorrow, the band have continued directly where the 2009 stunner Across the Dark left off, to the extent that the two are virtually indistinguishable outside of minor variations in production, so that's either going to be a positive or negative depending on just how much you enjoyed that. I thought it was certainly a milestone for the Finns, and one of their best outings, but I'm not sure I was in the market for what is more or less a duplicate of that.

One for Sorrow is true to its namesake, and the band retains its rare ability to wrench about the listeners' emotions through wailing walls of melody. Rather than rely on complexity in their compositions, they instead like to build upon simpler rhythmic motifs by intensifying the drums, slathering in the massive, full-throated growls of Niilo Sevänen, and letting those melodies glide above the interwoven mesh like brave gulls traversing the Arctic Circle, clung to the ailing rays of sun to keep them aloft. Like its predecessors, the album's style is routed pretty heavily in the mid to late 90s evolution of their countrymen Amorphis, so you'll hear some psychedelic and atmospheric keyboards throughout the disc, and a bit of vocal variation where the somewhat weak cleans are layered in with the gutturals.

The pacing dynamics are not necessarily placed upon an even footing, mind you, and Insomnium are more often heavy than not, but they'll often tone down to some cleaner guitar sequences like the lush instrumental "Decoherence" or the opening to "Unsung", two of the better songs here. I also really adored the intro piece "Inertia" as it slowly gathered force from its atmospheric ringing to Niilo's heart-pouring background growls, but instead of busting out one of the more potent emotional pieces to capitalized on it, I found "Through the Shadows" to be one of the least interesting and more predictable tracks. More intense are "Only One Who Waits" with the muted melodic tails in its opening thunder, or the moving title track which morphs from steady, percussive clean guitars and drums and layered vocals up to this inescapable, dreamy guitar melody like a beam of light through parted clouds.

Ultimately, I did not find the selection of tracks here to be quite so poignant or impacting as "The Harrowing Years", "The Lay of Autumn" or the epic "Down with the Sun" from the prior album, which was very near perfect in summary. Nor does this album teeter upon the balance of power and fragility quite so well as their superb debut In the Halls of Awaiting. The lyrics are fairly average, with a lot of cliched emotional imagery that exactly read like memorable poetry. I'd say that Insomnium have played it pretty safe here, but it's to their credit that One for Sorrow is still well structured and resonant enough to throttle most of the other bands in the sub-genre, and fans enamored of the colossal productions of fellow Finns Amorphis, Kalmah and Noumena will very likely find themselves in a familiar trance.