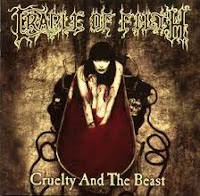 Countess Báthory Erzsébet and Cradle of Filth have something in common. Elizabeth purportedly murdered young virgin girls to bathe in their blood and ensure her own immortality. Thus, one might conclude that she was one of history's 'vampires'. Dani Filth and his merry band of Gothic outcasts also wanted to be vampires, pretty hard. Just look at their pictures, in and out of their album packaging from the 90s. So it's only too fitting that the one might create a tribute album to the other, and this manifest rather early in the UK band's career, with '98's Cruelty and the Beast, an album that arrived during the estimable height of their popularity, as smoke shop haunting mall teens began snapping up their t-shirts and pissing off their families, friends, and clergy.

Cruelty and the Beast is vintage Cradle, performing in that confused blend of black and Gothic metal aesthetics that caused one of the biggest rifts in the band's once cult following. Primarily, this is a symphonic black metal in the vein of Emperor or Dimmu Borgir but with a lot more ingredients of traditional or power metal riffing thrown into the mix. You'll still get a lot of the band's vicious tremolo picking speed akin to Dusk and Her Embrace or the debut, dowsed in synthesizers, choirs and Sarah Jezebel Diva's operatic backups, but it certainly seemed here that the band were content with 'stretching' themselves and their Romantically adorned lyrical concepts into a wider array of moody, historical haunted house flavors and Dani Filth's schizoid garden of snarls, grunts and growls back when the guy could actually pull most of his 'character' off on stage.

Her likeness hung in the black gallery
Commanding unease
Demanding of Death to breathe....

When it works, as with the excellent "Desire in Violent Overture" (one of my individual favorites across the band's discography), it truly excels. A firm escalation of violent, spattered riffing born from black and grind is slathered with wild leads and a blast bridge (about 1:00 in) that explodes into this glorious, Iron Maiden-like dual power metal melody. I don't like the actual production of the drums on the album, but Nicholas Barker blasts and double basses with the best of them regardless of its rather hollow sound. Other highlights here would be "Cruelty Brought Thee Orchids", a thundering atmospheric piece which swaggers about numerous tempos; "Beneath the Howling Stars", which has some of the better faster picked riffs on the album and the band's heavily symphonic, Gothic centerpiece "Bathory Aria" which manages to survive 11 minutes of existence without trampling the listener into a puddle of muddy mascara.

Unfortunately, not all tracks here are created equally, and there are a few like the post-intro opener "Thirteen Autumns and a Widow" or "Lustmord and Wargasm (The Lick of Catharsis)" which amount to little more than scatterbrained fits of Goth-core that bite off a little more than they can actually chew. The intros and interludes are fitting enough symphonic ligaments for this sort of conceptual beast, but aside from possibly the intro ("Once Upon Atrocity") they seem a bit foppish and forgettable. The instruments are all well defined in the mix, and yet I admit I would have gone out for a more fulfilling guitar and drum tone, both of which often feel as if they're about to drown under the overflowing tub of bloodshed created by the vocals and keys. The ensuing effort Midian handled this range of elements and instruments far better, though it was a superior album all around.

Deep red hissed the cat whips
On the whim of ill-will
Whilst She entranced, nonchalant, abliss
Flayed further songs of overkill

As usual, one of my favorite ingredients to a Cradle of Filth album are the lyrics, and those written for Cruelty and the Beast might number among Filth's very best, loaded with imagery worthy of the saga's idealized, part-fictional Hungarian backdrop and the horrors of this particular noblewoman's sanguine vices. A smutty, seductive play upon the classic styles of poets like Wordsworth, Milton and Gray, and there can be no question of the effort spent in scribing them. It's a shame so many people hate this band on principle, since I feel that even their vocal opposition might enjoy thumbing through the lyrics themselves. All told, this is the album the Brits really needed to make in this period: dynamic and slightly more accessible than the last, yet not abandoning the ripping speed and chaotic conflagration of the band's earlier vision. It suffers a bit from inconsistent writing and being 'flanked' by superior works (Dusk, Midian), but there are at least a few examples here of properly drawn virgin plasma to soak in through the years.