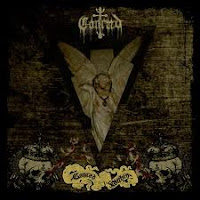 Conrad is the first and likely only metal act I've experienced from the island country of Barbados, but fortunately the novelty of its geographical origin is not the only quality subsiding within. This is essentially a filthy hybrid of death and black metal with loads of atmosphere created by both the raw guitar tones, reverb and the often overbearingly decrepit sounding vocals, some of which have been contributed by the helmsman for a neighboring Caribbean obscurity, known as 'Lord Ifrit' of Jamaican black metal act Orisha Shakpana. Musically, Conrad Within does not have a major aesthetic separation from underground extremists elsewhere, but where it certainly does stand on its own is in its unique lyrical fare, which centers on both the folklore and occult of its native region.

A smashing idea, if you ask me, to bring the barbarous black/death motifs to tales of duppies ('evil spirits') and Yorùbá religious ideals; and one that the multi-instrumentalist and vocalist Emdeka Anubis embraces full on with potent rhythmic sensibility. This is more or less your 'bedroom' style recording, with forceful mechanical drumming and a great, lo-fi appeal. You can hear traces of Burzum, Darkthrone and Mayhem in there, but Emdeka will also infuse grisly guttural vocals among the haunting tremolo patterns born of both gloom and melody. There are also acoustic segments and native island percussion influences in tracks like "Duppy Dust" that add just a trace more distinction and localization to the album. Or the wonderful, creepy pipe organs that inaugurate the title track before it explodes into rising surges of dripping blackness that drift off into the sweltering, hot climate.

I enjoyed all the samples and ambient sequences in general ("Crowley Invokation" is specifically pretty cool), and my gripes with the composition are minor. For one, I wouldn't actually mind if the material featured a higher ratio of its islander undercurrent to the more orthodox black metal aesthetics in the guitars. Conrad is in a unique enough position that he could flaunt his environment a bit more and get away with it. But it's not like the songs here are void of such character entirely, you definitely get a slightly skewed perception of composition that you might not have often run across in the past. The other complaint is just that the track with the guest vocals feels a bit shoddier in the mix than several of its neighbors. This ("Purgatory Process") is the most brutal on the album, and it just feels as if the vox are loud to the point of crumbling against the backdrop. Otherwise, Conrad Within is a solid start for just one man. You get a feel for the enigmas of antiquity from this rarely visited (by metal, not tourists) corner of the world. The choice in covers from VON and The Black is classy, and ultimately the album is fairly well seasoned and mixed.