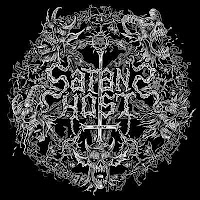 Harry Conklin's return to Satan's Host has by all indications been a rousing success, and with Jag Panzer's dissolution adding an easy incentive to continue the 'reunion', we can cross our fingers for more output from the screaming Colorado menace. And would you know it, we didn't have to wait very long, since it also happens to be the 25th year anniversary for the band, and to celebrate, they've offered up a pair of new songs and a whole array of re-recordings from those 'in between' years (1987-2010) when the band were releasing their 'unofficial' albums to a very limited audience, most of which featured another front man known as L.C.F. Elixir. I never paid attention to these recordings aside from companion pieces The Great American Scapegoat 666 and Power~Purity~Perfection...999, but if what I'm hearing on this collection is any indicator...then Satan's Host have had some strong songs waiting in the wings.

If you enjoyed By the Hands of the Devil, one of the year's better speed/power metal recordings, then let me be blunt: you will absolutely fucking love these tracks. The band have gone all out not to simply fashion together a bunch of odds and ends, but to actually manufacture what feels like a real new album. In fact, running head to head with that last album, this is nearly identical if not superior in quality. Granted, it's got a bunch of the band's classics like "Witches Return" (Midnight Wind EP, 1987), "Hell Fire" and "Metal from Hell" (Metal from Hell, 1986) which the Tyrant had already performed on during the band's formative years, so similar to the lauded Hell debut, there's not much new here, but each piece has been carefully selected and given quite the treatment. Being brought up to 'speed' with the times, and instantly offering the fresh new fans a wider selection of sing-a-longs for the band's future set lists, without losing the quality of production unleashed on By the Hands of the Devil.

Normally I don't go out for 'remakes', but if you're going to make such vast improvements over the originals, then why not? "Metal from Hell" and "Hell Fire" are prime examples, intensely fun classics given a fresh luster through Conklin's dual vocals, shrieking as if he were a young man again. Other standouts include "Cauldron of the Ancients" (In Articulo Mortis EP, 1999), which digs in for some taut, thrashing rhythms and a doomed lurch. "Nightside of Eden" (Archidoxes of Evil, 2000) which features some of the better melodic vocal lines on the disc in a number of ranges. Or the sluggish darkness of "Satanic Grimoire" (from an album of the same name, 2006) with its great, melodic tremolo bridge. But in truth, there is not a single piece here which falls short of entertaining, and Satan's Host incorporate a good range of variation in their writing, from the more aggressive thrash/speed sequences to power balladry.

The new tunes are also quite good. Both are fairly similar, solid and heavy with scathing chorus elements, though I preferred "Convictions" for its melodic speed licks over the opener, "For the Love of Satan". The mix is brilliantly executed, with Tyrant first and foremost but never entirely overpowering the guitars or rhythm section. Original member Patrick Evil is on fire throughout, easily trumping any of his past performances in his 25 years with the band, with a wonderful and signature style of playing that provides a perfect, hellish marriage to Conklin's tone. Ultimately, this is just one of those rare 'remake' records (like Vader's XXV or Destruction's Thrash Anthems) which succeeds in justifying its existence due to the superior quality on exhibition. With this and By the Hands of the Devil under their belts, Satan's Host have rocketed out of the past to become one of the foremost acts performing USPM today, even if they weren't really 'missing' for the last decade.